WASHINGTON (RNS) Taking direct aim at libertarian policies promoted by many American conservatives, the Honduran cardinal who is one of Pope Francis’ top advisers said Tuesday (June 3) that today’s free market system is “a new idol” that is increasing inequality and excluding the poor. Honduran Cardinal Oscar Rodriguez Maradiaga of Tegucigalpa prays during a Mass at St. Paul the Apostle Church in New York in 2009. RNS photo by Gregory A. Shemitz

“This economy kills,” said Cardinal Oscar Rodriguez Maradiaga, quoting Francis frequently in a speech delivered at a conference on Catholicism and libertarianism held a few blocks from the U.S. Capitol.

The pope, Maradiaga said, grew up in Argentina and “has a profound knowledge of the life of the poor.” That is why, he said, Francis continues to insist that “the elimination of the structural causes for poverty is a matter of urgency that can no longer be postponed.”

“The hungry or sick child of the poor cannot wait,” the cardinal said.

Maradiaga, who heads a kitchen cabinet of eight cardinals from around the world that Francis established to advise him shortly after his election last year, also argued that personal charity was insufficient to solve global problems.

“Solidarity is more than a few sporadic acts of generosity,” he said.

Instead, he said, solidarity with the poor, as envisioned by Catholic social teaching, calls for “dealing with the structural causes of poverty and injustice.” The cardinal stressed that the church “by no means despises the rich,” and he said Francis “is also not against the efforts of business to increase the goods of the earth.”

“The basic condition, however, is that it serves the common good,” he said.

A charismatic churchman who speaks fluent English, Maradiaga was animated in his criticism of the effects of today’s free market capitalism and he peppered his remarks with digs at economic conservatives.

Trickle-down economics, he said, is “a deception,” and he declared that the “invisible hand” of the free market — the famous theory advanced by the 18th-century philosopher Adam Smith — was instead being used as a cruel trick to exploit the poor.

Maradiaga at one point brushed aside the fierce criticism that many conservatives have leveled at Francis by noting that “many of these libertarianists do not read the social doctrine of the church.”

“But now they are trembling before the book of Piketty,” he said with a laugh, referring to the controversial best-seller on the wealth gap by the French economist Thomas Piketty. “At least it is making them think,” he added.

Maradiaga was the keynote speaker at the conference, called “Erroneous Autonomy: The Catholic Case Against Libertarianism.”

The daylong seminar waded deep into the contentious American political debate over the economy and the role of government, and it showed once again how the moral implications of that debate are playing out most vividly in the Catholic Church.

Paul Ryan, the Wisconsin Republican who chairs the House Budget Committee, is a Catholic who is also his party’s champion for budget cuts for social programs, cuts that are opposed by the church hierarchy. He is also a disciple of the libertarian philosopher Ayn Rand. 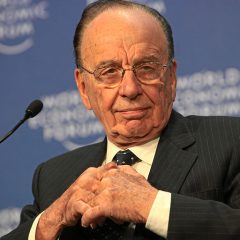 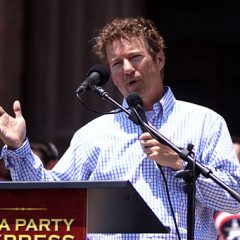 Rand Paul speaking to Tea Party Express supporters at a rally in Austin, Texas in May, 2012. 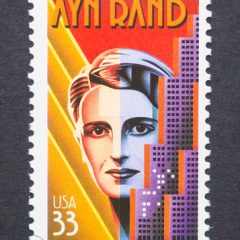 A postage stamp printed in USA showing an image of Ayn Rand, circa 1999. 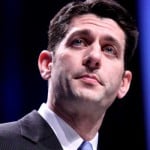 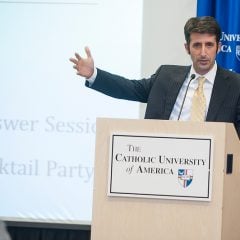 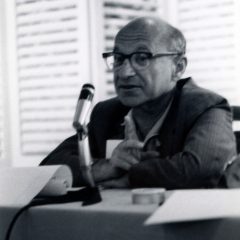 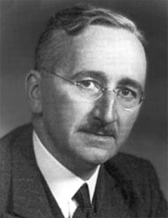 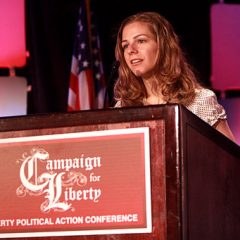 Sen. Rand Paul, R-Ky., while not a Catholic, is the GOP’s most prominent exponent of libertarian ideas and is being widely touted as a leading candidate for his party’s presidential nomination in 2016 — a race that increasingly looks as though it will serve as a national referendum on libertarian ideas.

Tuesday’s conference was sponsored by Catholic University’s Institute for Policy Research & Catholic Studies, and the speakers — bishops and theologians, as well as pundits such as Mark Shields and academics like John DiIulio — were almost universally antagonistic to free market libertarianism.

Yet it was CUA’s own business school that last year sparked a controversy by accepting $1 million from the foundation of Charles Koch, a billionaire industrialist who is an influential supporter of libertarian-style policies.

Critics accused the university of taking money to promote ideas that are opposed to Catholic social teaching. University officials rebuffed those charges, joined by many bishops and conservative Catholics who have become prominent advocates of the idea that Catholicism and libertarianism can coexist or even support each other.

That notion, however, found little backing and much opposition at Tuesday’s sessions.

Bishop Blase Cupich of Spokane, Wash., one of the U.S. hierarchy’s more prominent champions of Catholic social teaching, warned that growing inequality is creating “a powder keg that is as dangerous as the environmental crisis the world is facing today.”

Cupich said political leaders cannot wage this debate “from the 30,000-foot level of ideas” but must take into account the real-life implications of policies as they play out on the ground. “Reality,” he said, quoting Francis, “is greater than ideas.”