(RNS) Thou shalt not steal another pastor’s sermon?

Recent cases of high-profile pastors who have been accused of lifting others’ material are raising questions about whether pulpit plagiarism is on the rise — and whether it has become a more forgivable sin.

Seattle megachurch pastor Mark Driscoll was accused last year of plagiarism in material he wrote with Tyndale House Publishers and InterVarsity Press. “Mistakes were made that I am grieved by and apologize for,” Driscoll said in a statement. Most recently, popular Oklahoma City-based megachurch pastor Craig Groeschel has been accused of plagiarizing the work of writer and comedian Danny Murphy. 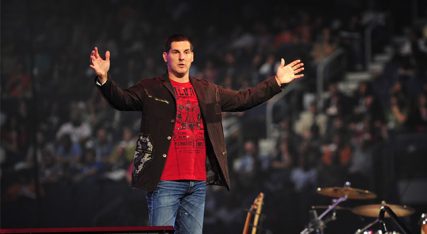 Groeschel is the pastor of Lifechurch.tv, a tech-savvy megachurch founded in 1996 that has quickly grown to one of the nation’s largest churches, with 80 weekly “worship experiences” across 19 campuses in five states.

On his blog, Murphy suggested Groeschel used material that Murphy wrote in the now-defunct magazine The Door in 2000. The material was later used by Groeschel in a sermon and in a book now titled “Love, Sex, and Happily Ever After,” printed by Multnomah Books. Murphy’s name never appeared with it.

It’s not the first time Murphy has found his work in the hands of others; he was “minding my own business in the back row of a church” when he heard the preacher use the same material from the article in The Door. When questioned, the pastor said he had found it in the best-selling book “Not a Fan,” by Kyle Idleman. Murphy flagged the issue for the publisher, Zondervan, and the attribution was fixed in the next printing of the book, he said.

According to Murphy, Multnomah has also inserted a footnote with attribution in Groeschel’s text, although Groeschel never admitted to lacking earlier attribution, maintaining the content was his.

“I feel strongly about giving credit and have done so over and over again in sermons and books,” Groeschel said in a statement. “We first used this idea in a sermon illustration video, which I sincerely thought was an original concept developed before the author’s article. To be above reproach, I asked my publisher to give this author credit, which is already reflected in the most recent reprinting of the book where this illustration is used.”

As more instances of plagiarism are being alleged, it’s unclear whether plagiarism is more common, or if it’s being reported more often. Plagiarism has been a long-standing issue among pastors, who are expected to churn out fresh content each week for sermons while in some cases also penning best-selling books.

“In this day of celebrity publishing, a lot of the quality control is eroding,” said David Gushee, Christian ethicist at Mercer University.

Sermons can be ephemeral things, in one ear of many parishioners and out the other. If the sermon is not written down or posted online, an unattributed quote can be easy to miss. Books, however, are an easier place to spot unsourced material.

There has been a long-standing debate among preachers over whether they can use sermon illustrations that they didn’t personally experience, Gushee said. “There are ways to borrow illustrations without being deceptive,” he said.

The ease of the Internet could be a double-edged sword for some pastors looking for material. With sermons and books so easily searchable online, watchdogs have better means of cataloging, searching and reporting offenses. And it’s much easier to learn about and report offenses of plagiarism than ever before.

Last year, an Episcopal priest in Massachusetts, the Rev. John E. McGinn, was accused of plagiarized sermons from Sermons.com. He was suspended by his diocese and said he planned to retire.

Richard Land, who was president of the Southern Baptist Convention’s Ethics and Religious Liberty Commission, came under fire in 2012 after being accused of plagiarism in his radio broadcasts. He has since become president of Southern Evangelical Seminary.

Tim Goeglein, who led the Bush administration’s point outreach to religious conservatives, resigned in 2008 after it was revealed that he plagiarized in columns he wrote for his hometown paper. He has since joined Focus on the Family.

In 2003, the Rev. Alvin O. Jackson, who then led Washington’s National City Christian Church, plagiarized sermons and then sold them for $50. He has since joined Park Avenue Christian Church in New York City.

Preachers have always borrowed and quoted and voiced other preachers, said Richard Lischer, a professor of preaching at Duke Divinity School.

“Most people understand that verbal footnoting is cumbersome,” Lischer said. “Christianity is not as focused on issues of copyright as other sectors in academics.”

There is an attitude among Christians that “what’s mine is yours,” that you don’t necessarily need to footnote Martin Luther King Jr.’s “I have a dream,” he said.

“It’s the nature of preaching. It’s like singing a song. You don’t just sing it once to never sing it again,” Lischer said. “It’s not so much cheating as it’s demonstrating a continuity with people who came before.”

Congregations might also be more willing to forgive a pastor who has plagiarized than they might have been in the past, said Ron Cook, a professor at Baylor University’s George W. Truett Theological Seminary who has served on the board of directors of the Baptist Center for Ethics.

“Not giving credit is not stigmatized as much as it was a quarter-century or even a decade ago,” Cook said. “In some cases I’ve known in recent years, the congregations are more willing to give their pastor a second chance.”

(Greg Horton contributed to this article.)