(RNS) As the Secular Coalition for America prepares for its biggest event of the year this week (June 12-14) in Washington, D.C., atheist groups are recovering from the sudden departure of the coalition’s highest officer and confronting renewed charges that nonbelief groups have a shortage of women leaders and are suspicious of conservatives. 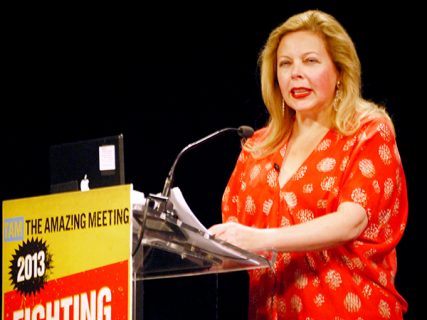 The SCA, which lobbies on behalf of more than a dozen secular groups, announced that its executive director, Edwina Rogers, was let go after employees embezzled $78,000 from the organization.

The story was first reported by The New York Times and referred to a leaked internal audit.

The SCA said Rogers, who was hired about two years ago, was in no way connected to the missing funds. She dismissed the two employees allegedly responsible and reported the matter to the police and the organization’s board.

“At no point was she ever under suspicion for any financial wrongdoing,” said Lauren Anderson Youngblood, SCA’s director of communications. She declined to state whether Rogers was fired or resigned, though Rogers described her departure as a dismissal to the Times.

And while the news left some members of the secular community lamenting the loss of a high-profile woman leader, something of a rarity in nonbelief groups, others said Rogers, a longtime Republican lobbyist, was never a good fit for secularists, who tend to skew Democratic. At the time of her hiring, her appearance on “The Real Housewives of D.C.,” during which she showed off a “gift-wrap room” in her mansion, drew particular scorn.

“Some atheists will surely be delighted by the decision, even if they have no reason to dislike Rogers,” Hemant Mehta, a former SCA board member, wrote on his blog, Friendly Atheist. “I don’t believe for a moment she gave us any reason to doubt her loyalties to the cause, but Rogers was never embraced by the larger community of atheists. They just didn’t trust a Republican, especially one who had strong ties to conservative Christian politicians.”

Mehta also called Rogers’ departure “a blow to gender diversity in our movement.” Working with SCA’s 16 member organizations, Rogers was arguably the most high-profile woman representing the secular community.

Her departure came a week before the group’s much-anticipated Lobby Day and Summit, a three-day event beginning Thursday in which secular representatives meet with members of Congress to discuss their issues and concerns.

Annie Laurie Gaylor, co-president of the Freedom From Religion Foundation, another coalition member, described Rogers’ work for SCA as “professional and organized” and as increasing the stature of SCA. Gaylor is confident more women will fill secular leadership positions.

“Women have held leadership positions into the last century in freethought groups, and I trust that will continue,” she said.

So who will replace Rogers? Youngblood said no executive search has begun, but Mehta floated Barney Frank, the former Democratic U.S. representative, as a possibility. Frank recently announced he is an atheist and last weekend accepted an award for Humanist of the Year from the American Humanist Association.

“It would be a major coup and a way to put Rogers’ abrupt dismissal behind them,” Mehta wrote.

It would also allow the group to devote itself to the liberal causes and projects the coalition has traditionally rallied around.