CASTRILLO DE MURCIA, Spain (RNS) It’s been three years since Juan Jose Duenas jumped over dozens of babies to the cheers of thousands of spectators, but he remembers it as one of the high points of his life and considers it the fulfillment of a family legacy. 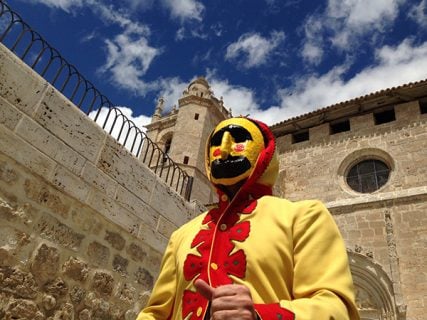 During El Colacho, usually celebrated during the Feast of Corpus Christi, men clad in yellow jump over infants to rid them of original sin.

Following in the footsteps of his father and his grandfather, Jose Duenas volunteered for the lead role in El Colacho, an unusual religious festival held in this small Spanish village on the Feast of Corpus Christi, commemorated Thursday (June 19) .

“(It) reinforces your bond with the people,” he said.

Even in a country famed for ostentatious spectacles like the running of the bulls in Pamplona and the tomato-throwing fest in Bunol, the baby-jumping element stands out and attracts a growing number of enthusiasts each year.

Yet few of the thousands expected to flock here today for this year’s festivities know that El Colacho is not just a quaint tradition representing the triumph of good over evil and welcoming newborns into the world — it’s also the village’s best bet in its battle for survival.

“These towns and villages around here have lots of history and religious festivals but few inhabitants,” said Angel Manso, an organizer of the event.

In the early 20th century Castrillo de Murcia had almost 1,000 inhabitants, five religious orders and five bars. Today it has one religious order, one bar and fewer than 200 people living in its picturesque stone houses. There are virtually no youths left and locals are continuing to move to the cities.

It’s a predicament shared by many small towns and villages in rural Spain, which has experienced radical rural flight.

“Modernism is breaking down the way of life that leads to traditions like El Colacho,” lamented Manso.

Though it might seem like a perfect publicity stunt, the festival was not invented for the benefit of outsiders. It dates back to 1620, the year it was first documented, and is believed to have pagan origins. 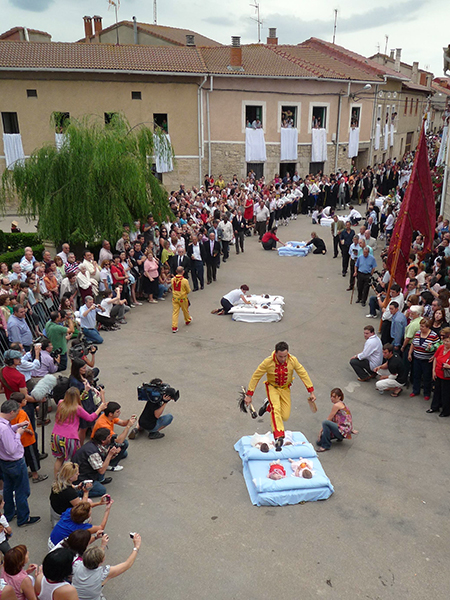 During El Colacho, usually celebrated during Corpus Christi, men clad in yellow jump over infants to rid them of original sin.

“When I was a kid the entire village would bend on its knees during the ceremony and it would take place in complete silence,“ reminisced 74-year-old Amadeo Santamana.

Other villagers agree much of the religious fervor that once surrounded the ritual is gone, but its key components are intact.

The highlight remains when the eponymous Colacho — a man wearing a yellow mask, yellow jacket, tight black pants and carrying a whip in one hand and oversized castanets in the other — runs around the village jumping over an obstacle course of babies aged 1 or younger.

The sight of a grown man dressed as a fiend leaping over the helpless babies might strike panic in the heart of some parents. But locals say the only injuries sustained in its history have been to Colachos who pulled hamstrings. Visitors like the ritual so much, the villagers said, that nowadays all the 70 or so baby participants each year are theirs.

“Some are only a few days old and parents bring them right from hospital so they can be welcomed in this tradition,” said Manzo.

Galloping over the toddlers demands a degree of physical ability. Jose Duenas practiced a few times by jumping over mattresses strewn with children of friends, but on the big day he found the high-flying act easier than expected.

“It was simple,” said the one-time Colacho, who is a financial adviser by day. “The anxiety you feel has more to do with respecting the rituals and the liturgy rhythm than with the jumping itself.”

He said he would gladly reprise the role but that tradition requires a different volunteer each year, which prevents squabbles over who gets the honor.

Those who can’t be in Castrillo de Murcia on Corpus Christi to catch a glimpse of El Colacho need not worry: A small cottage industry has sprung up around the festival. A local museum sells outfits and videos of the event year-round.

If nothing else, the festival has brought the village a little attention in a world indifferent to their suffering. For the old-timers who meet every day at the last remaining bar where they eat tapas, drink cerveza and chatter, it has proven a significant source of solace.

“When people hear Castrillo de Murcia, what do they think?” asked Santamana, the septuagenarian veteran of dozens of festivals. “They think of El Colacho, of course!”

News
A surge of evangelicals in Spain, fueled by Latin Americans
Follow us on Facebook!
Submit your photos to RNS