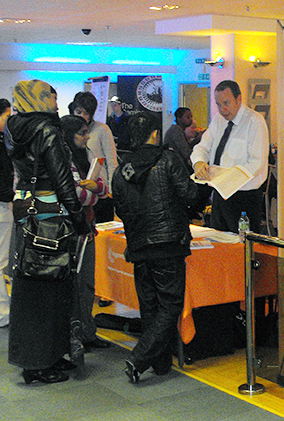 Job-seeking Muslim college grads are much less likely to hear back from potential employers if they include faith ties on their resume, according to two new studies.
June 16, 2014
Cathy Lynn Grossman

Job-seeking Muslim college grads are much less likely to hear back from potential employers if they include faith ties on their resume, according to two new studies.

Two new sociology studies find new graduates who included a religious mention on a resume were much less likely to hear back from potential employers.

The studies used fictitious resumes -- with bland names that signaled no particular race or ethnicity. These were sent to employers who posted on the CareerBuilder website to fill entry-level job openings in sales, information technology and other fields suitable for first jobs out of college.

The researchers tested seven religious categories including: Roman Catholic, evangelical Christian, atheist, Jewish, Muslim, pagan, and one faith they just made up, “Wallonian,” to see what would happen compared to people who made no faith reference.

Fewer employers called back the “Wallonians,” as well as the others, reacting to “a fear of the unknown,” said University of Connecticut sociology professor Michael Wallace who led the studies.

In the South, where researchers sent 3,200 resumes, those with a religious mention got 29 percent fewer email responses and 33 percent fewer phone calls than otherwise identical resumes with no faith ties according to the study, released by the Southern Sociological Society on their Social Currents site.

Muslims faced the sharpest discrimination with 38 percent fewer emails and 54 percent fewer phone calls to the voice mailboxes set up by the researchers.

In New England, 6,400 applications were sent to 1,600 job postings by employers. But applications mentioning any religious tie were 24 percent less likely to get a phone call, according to the study published in Research in Social Stratification and Mobility.

New Englander are a little more tolerant and they seemed not to care as much about religion. But in the South, the differences, particularly for applicants from minority religions show up more sharply, said Wallace.

While the study focused on entry-level jobs for new grads, Wallace said, "the bottom line message is that it is harmful to put it on your resume and this would relate to anybody at any point in their career.

"We have kind of a schizophrenic attitude toward religion in the U.S.," he said.  "We are a fairly religious country. We acknowledge religious freedom and religious diversity but at the same time, we don’t like it when religion is brought into public places such as the workplace or schools."

September 21, 2020
Related Posts
By Jeffrey Salkin
Yes, confederate names matter
By Peter Manseau
What Cotton Mather would tell the ‘Jesus is my vaccine’ crowd
By David Crary
More US firms are boosting faith-based support for employees
By Amanda Greene
In New England, battling the opioid crisis with a mix of science and faith
By Jerome Socolovsky
Thousands of historic Congregational documents to go online