NEW DELHI (RNS) Despite tougher laws against sexual violence, the grisly rape and murder of two teenage girls found hanging from a tree shows India has a long way to go to safeguard women in its male-dominated, socially stratified culture, critics say. 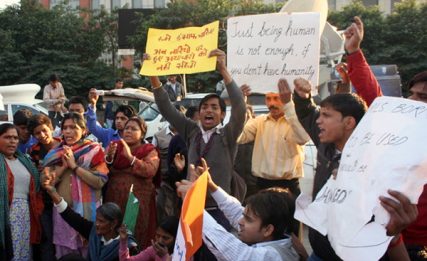 “Even though the laws are there, many people feel they can get away with anything, an attitude that some of our politicians have gone out their way to encourage,” said Ranjana Kumari, a prominent women’s rights activist and director of the Centre for Social Research in New Delhi.

The incident in Katra Sadatganj, an impoverished village in the north Indian state of Uttar Pradesh, is just the latest in a string of attacks. At least two other rape cases were reported in the past two weeks in the same state. The incidents are igniting debate about sexual violence against women and triggering outrage over lax attitudes about it, despite the strengthening of laws against rape last year.

The 14- and 15-year-old girls stepped out into a field at night on May 27 to relieve themselves — a common practice in India where more than a hundred villagers might share a single toilet — but never returned. After they were discovered suspended from the branches of a mango tree, Lal and other relatives refused to cut down their bodies for almost a day to ensure police conducted a proper investigation of the scene.

The case is evoking memories of the 2012 gang rape and killing of Jyoti Singh, 23, on a bus. In January, a 51-year-old Danish tourist was gang raped in New Delhi. Last year, three men raped an American tourist hitchhiking in Himachal Pradesh, a mountainous northern region popular among tourists.

More than 240,000 sexual offenses against women were reported in 2012, according to Indian government statistics. But human rights experts believe that number is vastly underestimated because many women don’t report the crimes.

However, high-profile rapes continue to occur, suggesting men’s behavior isn’t changing and marring the country’s image abroad. Last year, the number of female tourists dropped 10 percent, according to industry experts, in a country where tourism makes up 6 percent of GDP.

Meanwhile, politicians don’t seem to be helping. In early June, Madhya Pradesh state Home Minister Babulal Gaur — who oversees the police — cast doubt on whether rape should always be considered a punishable offense.

“It is a social crime which depends on the man and the woman,” said Gaur, who is a powerful member of new Indian Prime Minister Narendra Modi’s Bharatiya Janata Party, or BJP. “It is sometimes right and sometimes wrong.”

Such comments show how values enshrined in the new anti-rape laws have yet to permeate Indian society, Kumari said.

“There is a lack of political will to take sterner action against these cases,” she said. “It is not a question of law and order but the culture of fear for women and impunity for men.”

India’s traditional hierarchy of social castes is a major factor in the people’s resistance to changing their attitudes, Kumari said.

In Katra Sadatganj, the two girls were Dalits, or untouchables — the lowest of the low in India’s caste system.

Police arrested three brothers in the case, all belonging to the Yadav caste — higher on the scale than Dalits, and politically powerful.

“Members of the upper caste treat the state like their personal fiefdom, where most low-caste women are considered fair game,” said Kumari.

Federal authorities also arrested two police officers in the case on allegations that they failed to properly register the complaint about the rape. The officers now face two years in prison.

There’s been some progress, Kumari says. The government is enforcing its laws, at least in cases that garner public attention. People are more open to discussing the problem, too.

“A few years ago, a crime like this where the victims are Dalits in rural areas would never have been investigated, let alone reported in national and international media,” Kumari said. “The fact that the accused from the powerful Yadav caste have been arrested and are sure to be punished is important.”

In Calcutta, Suzette Jordan — a survivor of a brutal and widely reported gang rape in 2012 — revealed her identity, confronting a culture that often blames and punishes victims instead of the accused.

Jordan was gang raped in Calcutta’s posh Park Street neighborhood, giving rise to her moniker in the media as the “Park Street victim.”

“I wanted my life back,” she said. “I didn’t want to be known as the Park Street victim. I have a name. I refuse to be intimidated. We need more women to come forward, to report rape, to use the new laws to ensure the accused are punished.”

In Lucknow, the capital of Uttar Pradesh, activists have taken matters into their own hands to change peoples’ attitudes.

Usha Vishwakarma, 23, set up the Red Brigade, a women’s group that physically attacks men who harass girls. Changes to the law haven’t accomplished enough, she said. She plans to set up chapters of her controversial group in other cities.

“We saw sexual crimes dip by over 50 percent in our neighborhood ever since the group began,” said Vishwakarma. “This is the only way to curb such crimes by taking on the men in a manner they understand: by using our fists or by publicly shaming them.” 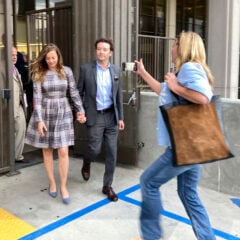 Religion Hub
Mistrial after jury deadlock in Danny Masterson rape case
Follow us on Facebook!
Submit your photos to RNS