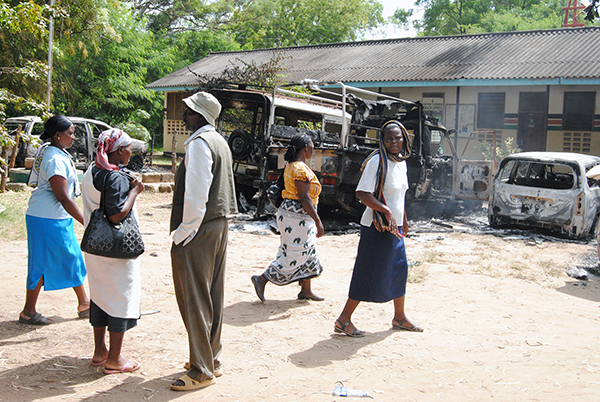 A government office in Mpeketoni, Kenya, was raided by attackers during the recent violence that left about 60 dead.
June 17, 2014
Fredrick Nzwili A government office in Mpeketoni, Kenya, was raided by attackers during a recent violent episode that left more than 60 people dead.

On Sunday and Monday, armed gunmen stormed Mpeketoni town and nearby villages, killing more than 60 people -- an attack described as the worst since the Nairobi Westgate shopping mall attack in September.

The gunmen held the town hostage for more than four hours, burning houses, hotels and banks and even attacking the local police station.

The Islamic militant group al-Shabab said it executed the attack as revenge for the Kenyan army’s presence in Somalia, the killing of Muslim scholars in the coastal region and the oppression of Muslims.

The government has since said this was not an al-Shabab attack but was carried out by a gang paid by politicians.

In the coastal region, Muslim leaders said their followers are angry at the unexplained killing of 21 clerics by unknown gunmen. On June 10, Sheik Mohammad Idris, a moderate figure, was shot dead before morning prayers.

“There can be no justification whatsoever for killing of innocent people,” Abdi told journalists at a news conference in Nairobi, while expressing grief at the attacks.

“We call upon the government to give its utmost priority to security matters,” said Abdi.

The Rev. Peter Karanja, general secretary of the National Council of Churches, demanded that the government take decisive action to stem the rising stream of insecurity.

In Nairobi, Roman Catholic Archbishop Zacchaeus Okoth said the attack was another indicator of growing insecurity.

Tensions have been heightening as the government resists calls by opposition parties for national dialogue on issues such as the Islamist threats.