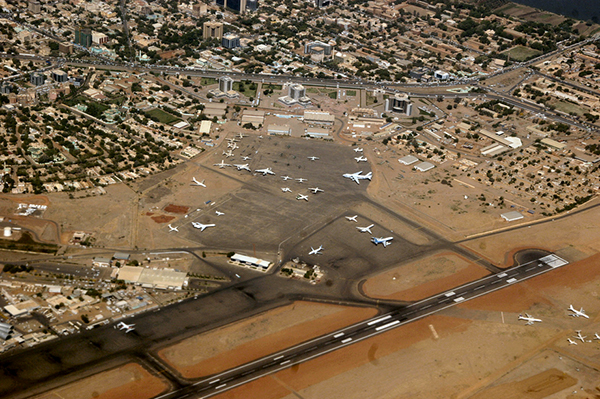 Khartoum International Airport, where Meriam Ibrahim was rearrested on June 24, 2014, a day after she was released from prison.
June 25, 2014
Fredrick Nzwili

(RNS) A Sudanese Christian doctor freed from death row on charges of apostasy Monday (June 23) is not yet free after authorities detained her at a Khartoum airport.

Khartoum International Airport, where Meriam Ibrahim was rearrested on Tuesday (June 24, 2014), a day after she was released from prison.

Meriam Yahya Ibrahim, 27, was arrested Tuesday after she attempted to leave Sudan using South Sudan emergency papers, including a U.S. visa, according to reports.

She was apprehended along with her husband, Daniel Bicensio Wani, an American citizen of South Sudanese origin, and their two children -- 20-month-old son Martin and a 1-month-old daughter.

“The Sudanese authorities considered (the action) a criminal violation,” according to a Facebook post by Sudan’s National Intelligence and Security Services. South Sudan, with a majority Christian population, became independent of Muslim-majority Sudan after a referendum in 2011.

Ibrahim’s lawyer, Mohamed Mostofa, said she is now being charged with forging a document, an offense that could result in a five-year prison sentence under Sudan’s penal code.

Sudanese church leaders were reluctant to comment, saying the issue was too “risky.” Some other African church officials, however, said they would not be surprised by new charges.

“There are two parallel systems running in Sudan -- Shariah and civil law,” said the Rev. Chrisantus Ndaga, a Roman Catholic priest with the Association of Member Episcopal Conferences in East Africa.

Ibrahim’s case had attracted international outcry, uniting churches, politicians and civil rights groups in the call for her release.