ROME (RNS) The Catholic Church in Italy is facing an embarrassing scandal after the arrest of a priest accused of demanding sexual favors from immigrants seeking political asylum in Sicily. Police arrested Sergio Librizzi on allegations that he abused refugees under his care.

The Rev. Sergio Librizzi, who was also the director of the Catholic charity Caritas in the Sicilian city of Trapani, was arrested at his parish on Tuesday (June 24) as he was preparing for Mass.

Prosecutors charge that Librizzi sought sexual favors from newly arrived migrants fleeing the Middle East and Africa in exchange for help with residency visas, as well as from the poor who sought help from the charity.

The priest’s arrest is particularly embarrassing for the church given Pope Francis’ strong stand in support of the immigrants flooding the area. Soon after his election last year, Francis’ first pastoral visit outside Rome was to the island of Lampedusa, near Sicily, where he called for greater solidarity and an end to the “global indifference” over refugees.

There has been a surge in refugees fleeing conflict and poverty in Syria, Iraq and other countries. Last month, the Italian government said the number of refugees and other migrants reaching its shores had risen to more than 39,000 in the first half of 2014. 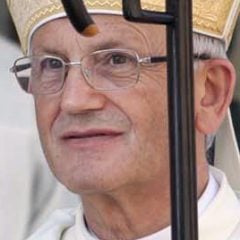 Pietro Maria Fragnelli is the bishop of Trapani.

After Librizzi’s arrest, Bishop Pietro Maria Fragnelli suspended Librizzi and expressed his “shock and dismay” at the priest’s alleged wrongdoing.

“We express our firm condemnation of serious and reprehensible behavior, unacceptable not only because it may be a crime but because it offends the dignity of human beings and seriously damages the dignity of priestly service,” Fragnelli said in a statement.

“We also express our sympathy and Christian solidarity for the victims of such behavior: We know that the Christian community is with them and pray that God will soothe their wounds.”

Librizzi is accused of at least 10 episodes of sexual violence against immigrants since 2009, and he also faces charges of embezzlement after the alleged discovery of 10,000 euros ($13,600 ) inside his church. Investigators say they plan to rely on witnesses and wiretaps in their case against him.

“The sexual crimes relate to a number of subjects, both underage and adults, all non-EU citizens with whom the priest was in contact through his position within Caritas,” prosecutor Marcello Viola told the media. “He forced young people through sexual favors, through pressure, using his senior role.”

News
In new book, Pope Francis addresses COVID-19 and politics, with an eye to the US
News
NBA players hailed by pope at Vatican for demanding justice
News
Scandal-plagued Catholic hospital’s story reads like a guide to Vatican turmoil
Signs of the Times
US Catholic bishops’ response to McCarrick report is sad but predictable
News
Vatican and US join to condemn rising anti-Semitism