The Pew Research Center’s new survey, “Beyond Red vs. Blue: The Political Typology,” finds no sharp lines dividing people by their views on politics, faith, family, and the role and limits of government.

Looking at questions relating to faith and family, he observed, “the caricature that all religious people are Republican is just not true.” 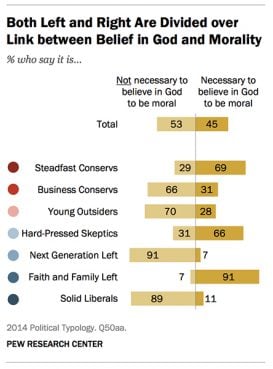 A new Pew Research Center report highlights the stark divide between political orientation and belief in god and morality.

Black and Hispanic political liberals who attend church and hold conservative views on issues such as gay marriage hew red on social issues.

To find where people align by values, the typology survey, based on 10,000 U.S. adults, divvies up the public into color zones.

Blue or shading that way:

And outside the zones altogether are the Bystanders (10 percent), often young, who take no part in politics.

“What you see is an anchor on the left of fairly secular people, balanced by the Faith and Family Left with a strong Democratic orientation but very religious personal lives. They’re more conservative about how they think people should be living their lives,” said Dimock.

“Both are very religious personally, but the Business Conservatives don’t translate that into a social conservative stance. They are not as moralistic on how they see the scope of issues.”

That turned up when Pew asked whether it was necessary to believe in God to be moral.

Yes, said an overwhelming number of the Faith and Family Left (91 percent) and more than two in three of Steadfast Conservatives (69 percent).

But the seesaw balanced with Business Conservatives (66 percent) and Next Generation Left (91 percent) saying belief in God was not essential to morality.

There are similar splits on views toward the Bible and human evolution.

Where Steadfast Conservatives and their Business brethren stood closest was on views of Islam. They were the only two types in which majorities agree on the the statement: “Islamic religion is more likely than others to encourage violence.”

However, on questions about homosexuality and gay marriage, Steadfast Conservatives are much more likely to take the strongest stands in opposition.

Nearly three in four (74 percent) say society should discourage homosexuality rather than accept it — markedly higher than the Faith and Family Left (48 percent) who agree with them.

Similarly, on gay marriage, 84 percent of Steadfast Conservatives and 55 percent of the Faith and Family left oppose it.

But gay marriage gets strong support from the right-leaning Young Outsiders (68 percent) and their counterpoint, the Next Generation Left (78 percent).

Both of those youthful “types” join the Solid Liberals in strong support for abortion to remain legal in all or most cases.

When Pew asked whether society is better off if people make marriage and children a priority, the same alignment emerged.

Most Young Outsiders (65 percent), Next Generation Left (72 percent) and Solid Liberals (77 percent) say society will do just as well if people have different priorities.

As Democrats and Republicans look ahead to elections, those generational divides are going to matter.

“The Democrats’ side is already aligning with generational change,” said Dimock,  “so the future isn’t as much of a challenge to the Democrats as it is to the Republicans.”