(RNS) Defensive lineman Israel Idonije was recently released from the Chicago Bears and, as a free agent, he isn’t sure what the future holds. But when he’s not on the gridiron, the Nigerian-born Idonije has another page in his playbook. 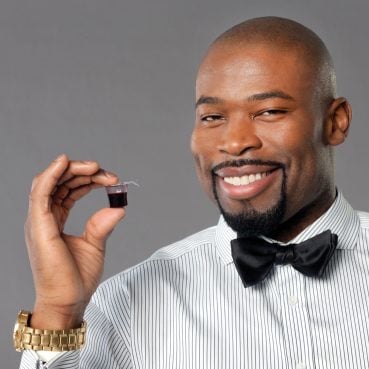 Idonije has a side business, Blessed Communion, that sells pre-filled Communion cups to churches.

Blessed Communion sells individually sealed, pre-filled Communion cups and wafers. Each cup is recyclable and contains 100 percent grape juice and an unleavened wafer. The product has a shelf life of 12 months and can be used in churches, prisons, mission trips or visits to homebound seniors.

Idonije, 33, said the business was “on its last legs” when he purchased it in 2009. “I had, you know, my advisers, people, you know, telling me I shouldn’t get involved,” he said.

When he bought the company, the product didn’t taste good and the cups leaked. But he said he had a feeling that revamping the company was the right thing to do.

Joey McBride is the buyer for church supplies and Bible studies at Family Christian Stores. He keeps Blessed Communion in stock, along with similar products from other companies, for customers looking for an easy and sanitary way to take Communion.

“A lot of the people we serve are in smaller communities, and smaller churches who perhaps don’t have a formal way of baking their own bread or getting wine or have the Communion products themselves to serve events,” McBride said. “So they want something that’s easy, something that’s usable, disposable and easy to clean up.”

Idonije says there’s a bigger issue when taking Communion: germs. “There’s such a large margin of error for contamination,” he said.

If anyone sneezes or coughs near the Communion elements, from preparation to being passed out, the wine and bread could spread illnesses.

Human hands, however, don’t touch Blessed Communion’s product until the consumer opens it like a small medicine cup with a pull-tab, almost eliminating the risk of contamination.

That’s why McBride said he’s seen an increase in demand for pre-filled Communion cups from customers.

Blessed Communion offers multiple options, including pre-filled cups with or without wafers, and an option for white grape juice.

Idonije said football, grape juice and wine are not what matter most.

News
In Oregon, churches and anti-fascists unite to provide mutual aid to fire evacuees and others in need
Opinion
Nike, don’t make me choose between Liverpool FC and the Uighurs
News
Without church or internet, many South Africans turn to liturgies at home
Coronavirus
Pandemic will alter Communion rituals for many US Christians
Beliefs
Four young people of different faiths move into a home together, then a pandemic happens