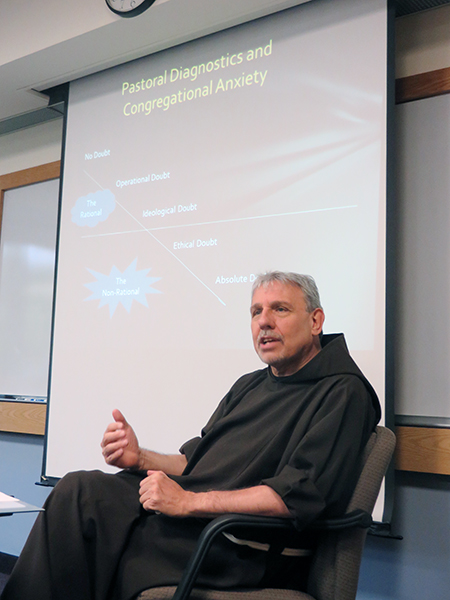 The Rev. David Couturier, who consults with dioceses around the world on management issues, explains the principles of what he calls "Franciscan economics" to nearly a dozen priests-in-training.
July 7, 2014
David Gibson

RADNOR, Pa. (RNS) “How many of you have ever studied a parish budget?” the Rev. David Couturier asked the 11 Catholic priests-in-training seated before him. After a few beats, just one hand went up, tentatively.

The Rev. David Couturier, who consults with dioceses around the world on management issues, explains the principles of what he calls "Franciscan economics" to nearly a dozen priests-in-training.

It’s also why these seminarians were at a Villanova University conference center in the leafy Philadelphia suburbs, part of a first-of-its-kind program that aims to provide some real-world grounding to the theological studies that dominate their course work.

It's a bit of “operative theology” to complement the “abstract theology,” as Couturier put it.

Couturier, a Capuchin Franciscan and a popular consultant on church management issues, was one of several guest lecturers this summer. He spoke about parish planning -- “The budget is your best theological statement," he said. "It will tell you where the priorities of the parish are" -- while the Rev. Michael White, who has written widely about building up congregations, probed the principles of effective leadership.

By the end of the course in mid-July, the students will hear talks on finances, human resources, facilities maintenance and security as well as a crash course in civil law.

The reason, and urgency, behind the program is simple: Today more than ever, Catholic parishes are complex entities that require a patient manager and a watchful overseer who can lead a team of collaborators, not just a staff of employees.

Once upon a time, the parish staff usually consisted of a janitor and a parish secretary, maybe a volunteer, while a phalanx of nuns and brothers would teach the students, clean the rectory and fix the meals. No more.

Today, there are pastoral and finance councils, and lay people fill most paid positions, which mean a payroll to juggle and benefits to parse. In addition, parishes have to comply with a range of church and civil statutes on everything from child safety to environmental waste to landmark status for historic buildings.

Moreover, all of this is happening at a time of declining attendance and decreasing contributions that are forcing pastors to do more with less.

Parsimonious pastors also know that a parish is still a cash business, a reality that is regularly driven home by the numerous stories of parish fraud and embezzlement that hurt the bottom line as well as the credibility of a church that is still trying to recover from the sex abuse crisis. 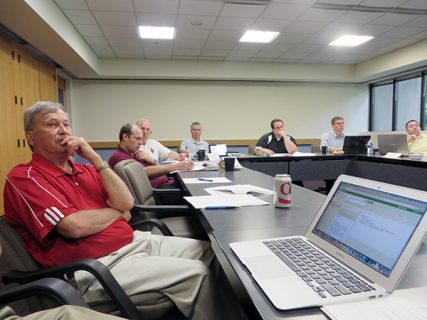 Charles Zech, in red shirt at left, listens along with deacons and seminarians in the Seminarian Leadership Institute started last summer by Zech, a professor of business at Villanova University and specialist in church management.

“The younger people, especially, if they see incompetence, they’re going to walk,” said Charles Zech, director of the Center for Church Management and Business Ethics at the Villanova School of Business and the prime mover behind this program.

Zech also noted another crucial factor: the ongoing priest shortage in the Catholic Church means newly minted clergy are likely to be running their own parish just two or three years after ordination, and may wind up leading several parishes not long after that.

That’s a big change from just a decade or two ago, when new priests could expect to serve 10-15 years as an associate pastor. They used that time to learn the ropes from experienced pastors about everything from who to call to fix the boiler to who to trust when it came to financial reporting -- and how to make sure there were checks and balances on everything.

“These guys are also likely to be living alone,” said Zech. “Unless they find a mentor or someone to help them get adjusted, they’re going to make a lot of mistakes.”

That’s why Zech pushed for a decade to start a program to give new priests a head start. Last summer he was finally able to launch the first Seminarian Leadership Institute, a five-week course that works in conjunction with the real-life experience that the seminarians are getting as they intern in local parishes.

Of the 11 men in this year’s class, five are from the Philadelphia archdiocese's St. Charles Borromeo Seminary, three are from the nearby Diocese of Allentown, two are from the Wilmington Diocese in Delaware, and one is from across the river in Camden, N.J. Nine are still in seminary, and two are "transitional deacons," meaning they will be ordained priests next spring, with a parish the next stop.

To be sure, seminarians these days are often older, sometimes in their 50s, and almost all of them have some previous work experience.

This crop of students, for example, includes a former newspaper sports reporter, a retired Navy pilot, and a onetime insurance executive, and some had studied business in college.

That’s still not enough, said Auxiliary Bishop Timothy Senior, the rector of St. Charles Borromeo Seminary. Senior, who raised the money to fund the institute, has more administrative experience than most priests: he has an MBA and a master’s degree in social work, and he worked in Catholic Charities for years and oversaw clergy personnel for the Archdiocese of Philadelphia.

Senior quickly discovered that the top reason that stressed-out priests requested a new assignment was to get out from under the heavy administrative burdens, and he wants to help new priests avoid that pitfall.

Senior stressed that he doesn’t want to turn priests into businessmen; instead, he wants them to use good management practices to help them operate a parish more efficiently, giving them more time to be the spiritual leaders they were called to be.

“To try to impose a straight business model on a parish is bound to fail,” said Albert Camburn, 42, a seminarian from Allentown who worked in construction for years before entering the seminary. Camburn was one of the student's in this summer's program.

As a foreman, Camburn said he learned some financial lessons that will serve him well as a priest, but the “hierarchy” of a work site didn’t help him develop strong people skills.

“I got very accustomed to barking orders. I didn’t want feedback,” he said. “But that doesn’t work in a parish. It may have at one time, but not anymore.”