(RNS) Arthur Caplan is the nation’s most quoted medical ethicist for a couple of reasons: He knows his stuff. And he’s unusually accessible. But even Homer nods. Arthur L. Caplan is the head of the Division of Bioethics at New York University Langone Medical Center.

In an essay in the upcoming issue of Free Inquiry magazine about the contraception and abortion debate, Caplan makes what the philosophers call a “category error.” In it, he tries to bring science into the argument about personhood. As Caplan frames the issue:

“When does human life begin? For those in the ‘personhood’ movement in the United States, there is no doubt about when that happens — it is at conception, when the sperm meets the egg. The personhood movement has gained a foothold among antiabortion activists who are looking to pass laws that define embryos as people with full rights.”

Caplan then offers a perfectly reasonable explanation of current knowledge about the biology of conception. At least half of fertilized eggs, he points out, never develop into a child. Sometimes conception results in multiple zygotes — and one or more get absorbed into the body of another. He suggests that brain development is a better marker for personhood.

“Conception is the start of something, but it is more the start of the possible rather than the actual. It is not until a being emerges that has the traits necessary for individual existence that we can and should say that a person has begun.”

Caplan is the founding head of the Division of Bioethics at New York University’s Langone Medical Center. So he has the credentials to offer his case. But I suggest he’s missing the mark.

What’s a category error? Here’s an example: The letter “A” tastes like chocolate. Unless you have the rare condition known as synesthesia, that statement makes no sense. Flavor is a category that can’t be applied to letters of the alphabet.

Similarly, science is all but useless in arguments about personhood. Because almost everyone who takes a position does so on the basis of religious belief.

There was a time when the most sophisticated understandings about conception weren’t particularly sophisticated. Maybe there were tiny people inside each sperm cell? No kidding, it was a popular theory in the 17th and 18th centuries. But spermists are about as common these days as flat-earthers.

If you believe as a matter of faith that the Creator of the Universe has established that persons are created the moment a sperm joins with an egg, what possible effect can Caplan’s argument have? 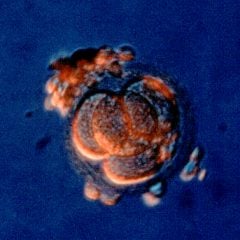 This image of a four-celled human embryo was captured with a light microscope.

Is the idea that it would be God’s will that most of those persons never be born be any harder (or easier) to accept than the idea of a soul per se? For most people, God’s plan is never considered to be particularly transparent to humans.

Of course, Caplan is not the only one to make a category error in the abortion debate. The other side makes the same mistake. Every time an opponent of abortion or contraception talks about a heartbeat or shows gruesome photos of aborted fetuses, or even an amazing image of a well-developed fetus, that’s a category error.

For personhood proponents, neither the sound of the heart nor the appearance of the fetus is relevant to their argument. They believe a human zygote that looks like a sea urchin is just as much a person. So what’s the point of the imagery and sound effects? Emotional theater. It’s a lot easier to evoke empathy for something that looks and sounds like a baby than it is for a four-cell embryo.

Caplan is working the other side of the emotional argument. It’s more difficult to have empathy for something that has less than a coin-flip chance of becoming a baby.

But proof-texting one religious belief against another — even if the opponents share some of the same texts — is another category error.  Exodus 21:22, for example, has been understood by millennia of Jewish sages to make it clear that a fetus has value but is not considered a baby. (The passage sets a financial penalty against a man who accidentally injures a woman and triggers a miscarriage.)

And that’s why this debate is and will continue to be so intractable. Whose beliefs should guide public policy?

(Jeffrey Weiss is a Dallas-based freelance writer. He can be reached at [email protected] Follow him on Twitter.)