(RNS) Muslim tradition calls for breaking the Ramadan fast in the evening with a date and a sip of water, and increasingly these days, the company of Jews. 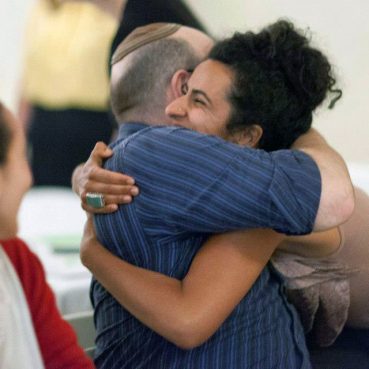 Muslim-Jewish iftars are popping up across the nation, bringing together dozens and sometimes hundreds of people for a celebratory Ramadan meal and a chance to forge interfaith friendships.

This Ramadan, as Jews and Muslims exchange rocket fire in Israel and Gaza, those attending these meals say they are all the more significant, as a way of demonstrating that Jews and Muslims have much in common, and can enjoy each others’ food and company.

In Los Angeles on Thursday (July 10), an iftar that bills itself as the single largest gathering of Muslims and Jews in the city, is sponsored by NewGround, an organization that works year-round on Muslim-Jewish relations. The group exists to build resilient relationships that both groups can draw upon in particularly difficult times, said Rabbi Sarah Bassin, NewGround’s former executive director.

“Yes, we are in another awful flare-up of violence and both of our communities are suffering,” Bassin said. “That will be acknowledged at the iftar.”

At next week’s “Iftar in the Synagogue” at Chicago Sinai Congregation, “we will try to figure out how we can deal with the tragedy overseas and move forward,” said Husna Ghani, management consultant at the Council of Muslim Organizations of Greater Chicago. “That’s the whole point.”

“There will probably be a lot of prayer,” she added.

Nearly 900 Muslims and Jews attended the Chicago event in 2012.

Ramadan, which began on June 29 this year, is the ninth month on the Islamic calendar, a time when Muslims focus intently on prayer, but also self-examination and charity. Muslims believe that God first revealed verses of the Quran to the Prophet Muhammad during Ramadan. Fasting during the month begins at sunrise each day and lasts until sunset. Iftars — the meals eaten after sunset during Ramadan — feature special dishes and desserts — particular to the countries where the world’s 1 billion Muslims live — and can last until the wee hours.

It’s customary for Muslims to invite extended family and friends to share the evening meal — sometimes even pulling in people off the street. That invitation to fellowship has become a staple in Muslim-American life. Former President George W. Bush held the first Ramadan iftar at the White House in 2001. Before that, Bill and Hillary Clinton hosted parties marking Eid al-Fitr, the feast celebrating the end of Ramadan. President Obama has hosted an iftar each year he’s been in office.

At Muslim-Jewish iftars, particular attention is paid to food. In Los Angeles, the meal will be both halal and kosher, in keeping with both Muslim and Jewish dietary laws, which often overlap. Neither faith community eats pork, for example. Out of respect for Muslim tradition, no alcohol will be served.

Some of these interfaith Iftars will be hosted in mosques or other Muslims institutions — on Sunday (July 13), for example, at the Institute of Islamic and Turkish Studies in Cary, N.C. Others will take place in synagogues.

NewGround’s iftar at Wilshire Boulevard Temple, for which more than 230 people signed up, is very intentionally held in a synagogue, said Bassin.

“It’s usually a very good mix — almost down the middle — of Muslims and Jews,” said Aziza Hasan, who is Muslim, and the interim executive director of NewGround.

And they’re asked not to sit only with co-religionists. Instead, groups that include both Muslims and Jews, Bassin said, are given icebreaker questions appropriate to the occasion. For example, she said: “What’s your relationship to fasting,” a religious practice of both Muslims and Jews.

“Instead of being stuck in our silos, we’re actually reaching out to each other,” Hasan said.