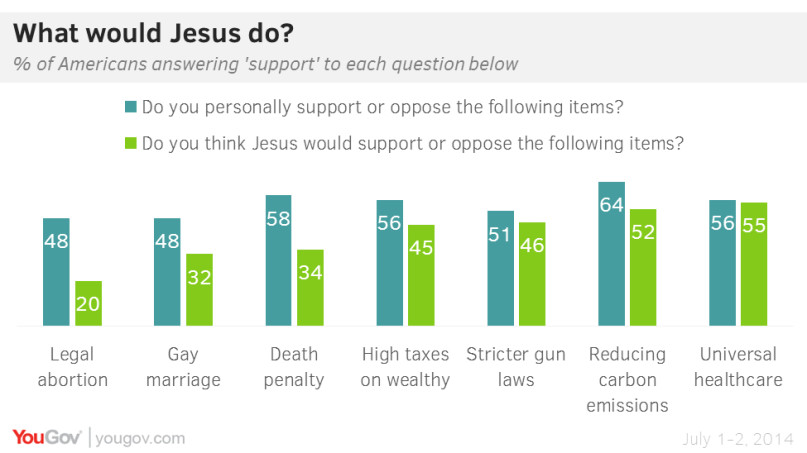 WWJD? For some Americans, it turns out, the iconic question is little more than a slogan on a bracelet.

According to a new poll, some Americans hold political views that they believe diverge from those they think Jesus would support. The poll was conducted among 1,000 Americans by YouGov, a non-partisan research and consulting organization. According to the study, Americans diverge most sharply from their perceptions of Jesus on key social issues:

Americans—over three-quarters of whom identify as Christian—are more liberal than they think Jesus would be, with the exception of the death penalty for murderers.

“Across a range of key political issues Americans tend to have more liberal attitudes than they say Jesus would have,” the study summary states, “and among Christians the ‘Catholic Jesus’ is slightly more liberal than the ‘Protestant Jesus.’”

One of the most significant factors in what people think Jesus would support is political affiliation.

This data may begin to explain why partisan Americans seem to favor the scientific data or theological arguments or political ideas that support their preconceived notions, while dismissing those that contradict their views. I described this phenomenon in my book, A Faith Of Our Own: Following Jesus Beyond the Culture Wars:

When people hold two or more contradictory beliefs, ideas, values, or behaviors at the same time, they experience mental stress called “cognitive dissonance.” According to Leon Festinger who coined the term in 1957, “When dissonance is present, in addition to trying to reduce it, the person will actively avoid situations and information which would likely increase the dissonance.”

When predominantly Christian Americans say they follow Jesus but then hold to views that diverge from those they think Jesus would support, it creates cognitive dissonance. To reduce their mental stress, they interact with and accept only information that confirms what they already believe to be true.

But just because it makes you feel better, doesn’t mean it’s the most consistent, intelligent, or even faithful way to live.