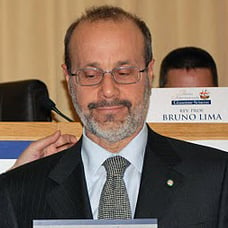 Giovanni Maria Vian is the editor of L’Osservatore Romano. He has worked as the newspaper’s top editor since 2007.
July 15, 2014
Josephine McKenna

VATICAN CITY (RNS) The Church of England's vote to allow female bishops threatens unity with the Catholic Church, according to the editor of the Vatican newspaper, L’Osservatore Romano.

Giovanni Maria Vian is the editor of L'Osservatore Romano. He has worked as the newspaper's top editor since 2007.

Giovanni Maria Vian, who is also a Rome historian, on Tuesday said the decision would have “an extremely negative impact” on steps to bring the churches closer together despite a positive meeting between Archbishop of Canterbury Justin Welby and Pope Francis a month ago.

“Clearly it's a decision that complicates the ecumenical path,” Vian said in an interview with the Italian newspaper La Stampa published on Tuesday (July 15). “The problem is not only with Rome but also with Orthodox Churches, and that the Anglican Church is itself divided on the issue.”

After nearly 20 years of debate, the Church of England's General Synod voted Monday to permit women priests to be ordained as bishops, overturning centuries of tradition in a church that has been deeply divided over the issue.

The Vatican newspaper made no mention of the issue in its Tuesday edition, and the Vatican's chief spokesman, the Rev. Federico Lombardi, was not available for comment. L'Osservatore Romano is a semi-independent publication of the Vatican and rarely publishes anything that strays from the church's position or teaching.

Sir David Moxon, the archbishop of Canterbury’s representative to the Holy See, said the Anglican and Catholic faiths enjoyed good relations, and Vatican officials had told him that collaboration would continue.

“We know there are differences, but what unites us is much greater than what divides us,” Moxon told RNS. “Relations between the archbishop of Canterbury and Pope Francis are cordial and respectful.”

Cardinal Angelo Bagnasco, head of the Italian Bishops’ Conference, said the Catholic Church’s view on female priests was clear as “everyone knows what it thinks."

The Church of England is the mother church of the 77 million-member Anglican Communion, which includes the Episcopal Church in the United States. Episcopalians were the first branch of Anglicanism to elect a female bishop, in 1988, and today are led by a woman, Presiding Bishop Katharine Jefferts Schori.