A presumptuously titled blog post, “God Does Not Support Vaccines,” has recently been making the rounds, garnering more than 8,500 “likes” on Facebook. It first appeared on a website called Living Whole, which is run by a woman named Megan who has this to say about her family:

We do not vaccinate.

We do not medicate.

We do not use any chemical products in our home or on our bodies.

We believe in natural childbirth and had our last baby un-assisted at home.

We greatly limit the use of technology in our home.

We are barefoot…most of the time.

We believe in Jesus.”

“God Does Not Support Vaccines” is a remarkable example of scaremongering. The Big, Bad Government, Megan alleges, is steadily chipping away at the religious exemption currently allowed by 48 states. When that happens, you’ll have to home school, but even then, you can’t rest, because They Will Be Coming For You. 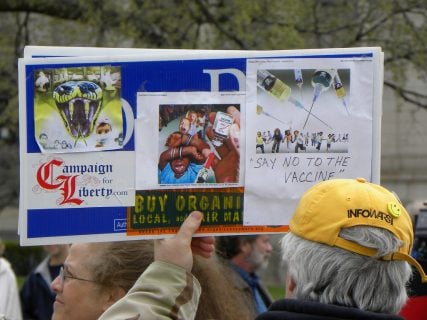 In some states, religious exemptions are simple to get. In others, it’s more complicated. Iowa, for example, requires that the parent demonstrate that

“immunization conflicts with a genuine and sincere religious belief and that the belief is in fact religious, and not based merely on philosophical, scientific, moral, personal, or medical opposition to immunizations.”

(Twenty other states allow a “personal belief” exemption, meaning that parents can simply decide, for whatever reason, that they don’t want their kids vaccinated and that is that.)

Megan’s post, as the title suggests, seems an attempt to offer vaccine skeptics a “genuine and sincere” belief “that is in fact religious,” this despite the fact that, as Judge William F. Kuntz II of Brooklyn’s Federal District Court noted in January, SCOTUS decisions have

“strongly suggested that religious objectors are not constitutionally exempt from vaccination.”

In any case, Megan’s “religious” objections are founded on very shaky theological ground. She cites Genesis 1:31, the creation account, as ‘proof’ that vaccines contradict God’s will:

“God saw all that he had made and ‘it was very good.’ God’s perfect. Nothing further needed.”

Anticipating the objection that this “very good” condition was before the Fall of Adam and Eve from Paradise, Megan goes on to attribute the development of vaccines to human arrogance:

“We actually think ‘we’ hold the key to improving upon His design…as if He forgot something when He created the immune system.”

She goes on to assert

“Despite what you’ve been told, aborted baby goodies are in your vaccinations”

and to argue that for pro-life people of faith, the ‘fetal cell argument‘ constitutes a religious objection as well.

Finally, she relies on the old “your body is a temple of the Holy Spirit” verse, which I’ve heard invoked as a religious justification for everything from eating gluten to doing Crossfit to not drinking wine.

There’s nothing really new in this piece, except perhaps that it is a good example of the Lernaean Hydra qualities of the vaccine-suspicious. Cut off one argument (it’s the thimerosal! It’s the MMR!) with good science and something else pops up: this is about being pro-life; this is about trusting ‘God’s good design,’ this is about not giving into fear when, according to Megan,

Maybe Megan would do well to spend a little time in nursing homes (except I don’t think it’s a wise or compassionate decision to visit elderly people unless your vaccinations are up to date…) and ask folks to tell stories about what it was like when they were little, and

— children under 5 and adults under 40 had a one-in-five chance of dying of diphtheria
— babies >1year died of whooping cough at a rate of 68% when my grandma was a teen
— playmates would be fine one moment, and their muscles would be shriveling from polio the next

Paul Offit, who is chief of infectious disease at Children’s Hospital of Philadelphia (and regularly excoriated by anti-vaxxers, who call him Dr. Profit because he developed a rotavirus vaccine that, OF COURSE, garnered him financial success) tells of when, in 1991, as a young attending at Children’s, he saw 9 children die of measles.

Some of those were part of a church that “didn’t believe in medical care.” Some were kids who’d simply come into contact with those kids.

Offit has argued for an end to religious exemptions, saying that it’s tantamount to child abuse, and that

I’m inclined to agree, on the same principle that parents’ religious beliefs against, say, antibiotics don’t excuse them from charges of manslaughter if their child dies from a treatable illness. And in the case of vaccines, the children who come into contact with the children of those parents shouldn’t be afforded less protection, either.

Of course, those who fear vaccines more than the diseases that vaccines have very nearly eradicated in this country (and in the world — notice we don’t vaccinate against smallpox anymore, because it’s not IN THE WORLD anymore?) will not be able to hear me. To them, I can only issue the same invitation I’ve issued before:

If you truly believe that vaccine-free is best, get on a plane with your kids and go to one of the countries where measles, mumps, diphtheria, and polio are not even close to eradicated. Then realize anyone from there can come into your community, your school, your church, your grocery store and start an outbreak — if not in you, than in the vulnerable people you come in contact with you.

And if that truly doesn’t bother your conscience, you don’t deserve a religious exemption of any kind, since virtually every religion includes something like this: take care of others as you’d take care of yourself.