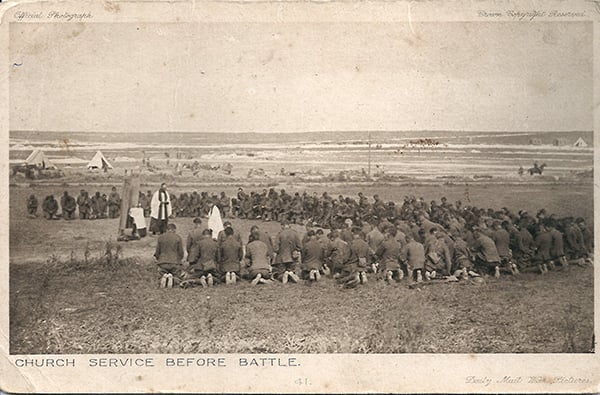 “Church Service Before Battle” depicts a group of World War I-era soldiers kneeling to pray at a church service before going into battle.

As the world marks the 100th anniversary of the outbreak of World War I — a conflict that left 37 million dead or wounded and reshaped the global map — a number of scholars and authors are examining a facet of the war they say has been overlooked — the religious framework they say led to the conflict, affected its outcome and continues to impact global events today.

More than that, they argue, today’s religious and political realities — ongoing wars, disputed borders and hostile relationships — have their roots in the global conflict that began when Austria-Hungary declared war on Serbia on July 28, 1914.

Communion services for soldiers on the battlefront was the cover story of the Nov. 12, 1914, edition of the “Christian Herald.”

“You can’t understand the war fully without investigating the religious dimensions of the war,” said Jonathan Ebel, an associate professor of religion at the University of Illinois whose “Faith in the Fight: The American Soldier in the Great War” has just been issued in paperback.

“I would be the first to tell you the Great War was not a war of religion, but I think a big part of people’s understanding of what they were doing in the war, or why the war made sense to them, comes from religion.”

“Faith in the Fight” explores how American soldiers, field nurses and doctors and other aid workers used their religious experience to face the war. Reading through letters, memoirs and other contemporary accounts, Ebel discovered that rather than disillusioning those who fought the war, it somehow reinforced their ties to religion.

“The experience might have been something that knocked people off their beliefs, made them question,” Ebel said. “But based on the material I was able to draw on, the war for many Americans was not a disillusioning experience. Rather, it confirmed the illusions — if you want to call them that — of why they entered the war.”

Ebel draws a line from the “masculine Christianity” of the early 20th century (evangelist Billy Sunday’s enormously popular revivals often included military recruiting tents) to the way combatants and support workers thought of the war. Soldiers scribbled lines of Scripture on their gas masks, marked their calendars with a cross for each day they survived combat, and opened the pages of the Stars and Stripes military newspaper to read poems comparing them to the heroes of the Old Testament.

That is echoed on a global stage in “The Great and Holy War: How World War I Became a Religious Crusade” by Philip Jenkins, a professor of history and religion at Baylor University. The book pulls the lens back from individual Americans to highlight the religious imagery, rhetoric and symbolism used by all sides in the war to further their goals. Typical religious postcards sent to loved ones during World War I.

Several countries — especially Russia and Germany — saw the war as a fulfillment of their unique destinies as the kingdom of God. But Europe did not have room for so many countries with the same aspiration.

“You can toss a coin as to which country to blame, but their two clashing visions made war inevitable,” Jenkins said. “If you do not understand the messianic and apocalyptic imagery used by all sides, and how wide-ranging those images were among all classes, all groups, all nations, you cannot hope to understand the war.”

Jenkins gathers numerous examples of biblical images of angels, demons, apocalypse and righteousness and shows how both sides in the war used them to justify the fight and rally support at home. It is no wonder, he writes, that the war was frequently referred to as “apocalyptic,” or even as Armageddon, the final battle the New Testament says will restore a heavenly kingdom.

“I could almost rewrite my book in terms of angels,” he said, citing one of the most frequently used — and believed in — images of the war. The most famous example are the so-called “Angel of Mons” — ghost soldiers from the 15th-century Battle of Agincourt led by St. George who supposedly appeared on the the British lines in France.

But the ghost soldiers were the post-Mons invention of Welsh poet Arthur Machen. Yet when he pointed out they were a fiction, people accused him of suppressing the truth. 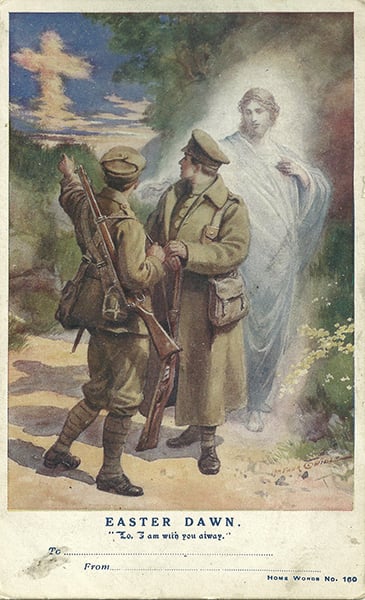 Typical religious postcards sent to loved ones during World War I.

“You don’t get anything like that in World War II,” Jenkins said of the belief in angels on the battlefield. “In World War II, there were hundreds of depictions of angels, but they were all in films and books that were clearly fantasy and fiction. But the angel stories in World War I were taken seriously.”

But if the angels were fictions, the new realities established at the end of the war in 1918 were very real and still affect global religion and politics today, Jenkins writes. After the war, Jenkins said, Jews felt a more urgent need for a land of their own. The push for a Jewish homeland gained momentum and led to the establishment of Israel in 1948 — and to the conflicts between Israel and some of its neighbors today.

Adolf Hitler, too, latched on to the widespread humiliation that permeated a defeated Germany to establish his Third Reich, sowing the seeds for the Holocaust that would leave 6 million Jews (and millions of others) slaughtered.

Jenkins also traces the contemporary push for an Islamic caliphate — or Muslim kingdom — by contemporary groups such as The Islamic State and al-Qaida to World War I. In many ways, the Middle East map we know in 2014 has its origins in the aftermath of World War I.

“The end of the caliphate (after World War I) removed the certainty of faith and state for Muslims,” Jenkins said. “It was an uncharted wilderness. And what most of them have tried to figure out for the last 90 years is how do you live in that wilderness?”

He also tracks the rise of African Christianity to World War I, which he said exposed the previously isolated continent to new ideas and new faiths as they fought alongside or supported their European colonizers in the war.

“This was an era of mass movements, healings, religious risings, nationalist Christian restructuring, Marian visions,” Jenkins writes of Africa in 1918 and beyond. “When the newer churches write their history, they will give pride of place to those critical years after 1915, when believers tried to make sense of a world plunged into destructive insanity.”