ALEXANDRIA, Va. (RNS) Rhonda Rowe and her team gathered around a diagram of the nursing home’s floor plan and determined how to split up to avoid praying with anyone twice.

Rowe made her way to a room where a 93-year-old woman lay in her bed while her 87-year-old roommate sat in a wheelchair. Rowe knelt between them and went through her “Nursing Home Gospel Soul-Winning Script.”

“Fill me with your Holy Spirit and fire of God,” the 93-year-old repeated. “I’m on my way to heaven. I have Jesus in my heart.”

Rowe was soon off to the next room, but before she left, acknowledged that she might never see them again on earth. “I’ll see you girls in heaven!” she chirped.

Welcome to the world of nursing home evangelism, where teams of lay evangelists target senior citizens for one last chance in this life for glory in the next. 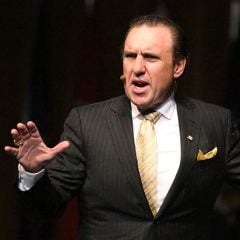 Rowe, who attends The River at Tampa Bay Church, was in town for a three-week “Celebrate America” revival in downtown Washington led by the church’s pastor, Rodney Howard-Browne. Each night, attendees heard Howard-Browne preach at the Daughters of the American Revolution’s Constitution Hall. By day, as others hit the subway stations or visited Capitol Hill, Rowe and other team members made a beeline for local nursing homes.

“Do you know, for sure, that you will spend eternity in heaven?” Rowe would ask a typical resident.

Pastor Eric Gonyon, coordinator of the Celebrate America revival, reviewed the rules before the teams departed.

“If you do go to the nursing homes or assisted living homes, there’s HIPAA rules and we do follow them,” he told about 60 people at a training session, referring to the Health Insurance Portability and Accountability Act, the federal law that governs patient privacy. “You can’t give follow-up information in nursing homes and assisted living homes. We don’t bring anything in.” 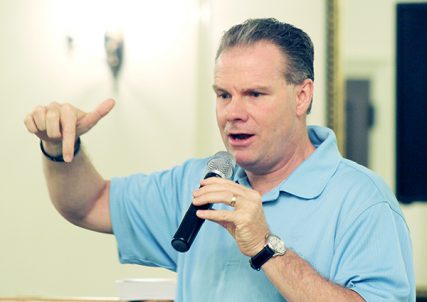 Ministry officials had contacted a nursing home here ahead of time to get permission for the visit. After checking in, the team immediately went to work for about an hour.

Sometimes, Rowe and her five-member team asked residents who couldn’t speak for nonverbal answers, such as blinking their eyes or squeezing a hand if they agreed with the script.

The website of Revival Ministries International includes detailed instructions on how to search Google for nursing homes, determine the size of a visiting team based on the number of beds and tally the decisions garnered during the visits.

Of the millions of souls the ministry claims to have won, Gonyon says more than 500,000 came from commitments and recommitments at retirement and nursing homes since 2007.

“Many of these people, they don’t have friends or families that visit,” said Lauren Bowerfind, a 27-year-old student at Howard-Browne’s River Bible Institute who was on Rowe’s team. “We’re the only Jesus that they may see.”

Some experts on elder spirituality said the methods give them pause. Nursing home residents are, after all, a mostly captive audience — many of them hobbled by mental as well as physical ailments.

The Rev. Nancy Gordon has worked at the California Lutheran Homes Center for Spirituality and Aging as its director since June 2008.

“In a sense, it’s good that they were remembering older people who often are just totally not remembered, but I do just have some reservations about the sort of conversion emphasis,” said the Rev. Nancy Gordon, director of California Lutheran Homes Center for Spirituality and Aging.

“From where I sit, it’s a little disrespectful to just launch into nursing homes and start to talk to people with a script, basically wanting them to believe in Jesus,” Gordon said.

The Rev. John McFadden, a retired United Church of Christ minister and the memory care chaplain at Appleton Health Care Center in Wisconsin, said spiritual care in elderly home settings ranges from a “wonderful, person-centered” approach to those “fearful that some of the residents are going to go to hell if they don’t do the deathbed confessions.” Most religious groups, he said, tend toward the first option.

But McFadden said a Catholic resident, for instance, who might not be aware of a conservative Protestant context, could think, “’These are church people, so it’s got to be OK’ and kind of goes with the flow.”

During Rowe’s recent visit here, some residents were more receptive than others. A 57-year-old man halted a solitaire game on his laptop and let Elizabeth Christiensen, another Bible institute student, pray for “a favorable report” at an upcoming doctor’s appointment.

Lauren Bowerfind holds the tally of decisions for commitment and recommitment to Jesus that she and her team garnered during a visit to a Washington, D.C.-area nursing home on July 17, 2014. They were in the area attending the three-week Celebrate America revival led by Pastor Rodney Howard-Browne.

Abebech Tebeje, a first-time trainee from Silver Spring, Md., found her English script was too hard for a bedridden resident to repeat. When she switched to Amharic from her native Ethiopia, the man followed along and repeated her words. But a woman, who was standing in another room when Tebeje approached, listened as she started the script and eventually said: “Not today. I’ve got to think about it.”

In the hallway, where the 1950s song “Lollipop” was piped through the sound system, the evangelists discussed whether each discussion merited an addition to their count or not. Once outside, Bowerfind tallied their total: 16.

To those who question their mission, Gonyon said the ministry answers to a higher power.

“We have no response to those who are critics other than obeying Jesus and the Great Commission to preach the gospel regardless of the physical condition of the hearer,” he said. “Eternity will answer their questions!” 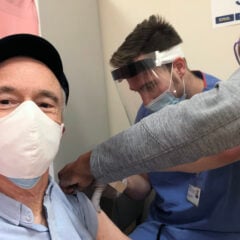 Signs of the Times
With vaccinations, an army of gray volunteers is coming 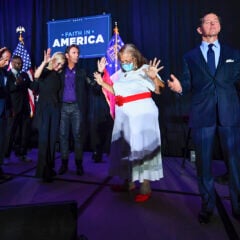 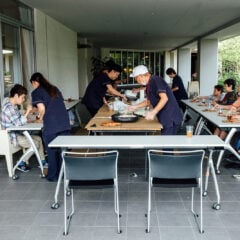