VATICAN CITY (RNS) Pope Francis met Meriam Ibrahim, the Christian woman spared a death sentence for apostasy in Sudan, at the Vatican on Thursday (July 24) after she was flown to Rome by the Italian government following a vigorous international campaign to free her. 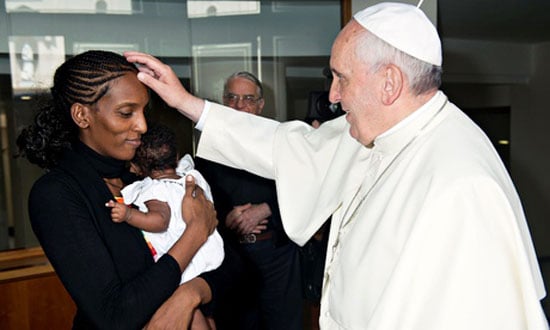 Meriam Ibrahim, the Sudanese woman who was nearly executed for apostasy for marrying a Christian man, and her daughter, Maya, meet Pope Francis at the Vatican after arriving in Italy on July 24, 2014, en route to the United States.

Ibrahim, 27, was accompanied by her husband Daniel Wani and two young children when she met Francis for nearly half an hour at his Santa Marta residence.

The audience was arranged only hours after she disembarked at Rome’s Ciampino Airport with her family on an official Italian aircraft. She was smiling as she carried baby Maya, who was born just two months ago as Ibrahim was shackled in prison.

The pope thanked her for her courage and loyalty to her Christian faith despite facing threats of execution in an ordeal that lasted nearly a year.

The Vatican’s chief spokesman, the Rev. Federico Lombardi, said Francis wanted Thursday’s meeting to be a “gesture of support for all those who suffer for their faith, or living in situations of difficulty or restraint.”

On Wednesday, Ibrahim’s case was the subject of a congressional hearing in Washington as lawmakers sought to highlight her plight and Sudan’s poor record on religious freedom.

The Washington-based Family Research Council, the Christian lobby group which has led the U.S. campaign and gathered more than 53,000 signatures in support, welcomed Ibrahim’s release.

“We celebrate Meriam Ibrahim and her family’s escape to freedom,” said FRC President Tony Perkins in a statement. “It is our hope and prayer that Meriam and her family will now enjoy the liberty to practice their Christian faith without government interference or persecution.”

Lapo Pistelli, Italy’s deputy foreign minister, flew to Khartoum to collect Ibrahim and accompany the family on the flight to Italy.

He said her Sudanese passport was only returned by authorities late Wednesday and she was told she could leave the country with her husband, who has U.S. citizenship. The family is expected to leave Italy for the U.S. within days.

Ibrahim had been trapped in Sudan since her release from prison where she was awaiting execution for refusing to renounce Christianity. Even though she has been a Christian her entire life, Sudan considers her a Muslim because her father is Muslim.

She gave birth in chains in a Khartoum jail cell in May after her father claimed she had abandoned Islam and committed adultery with her Christian husband as mixed-faith marriages are considered illegal.

The country’s Supreme Court threw out the death sentence in June.