JERUSALEM (RNS) In Beit ‘Anan, a small Arab village in the West Bank, Haya Dawod, and her extended family sit around a large round table in her parents’ dining room for the celebratory Eid meal. 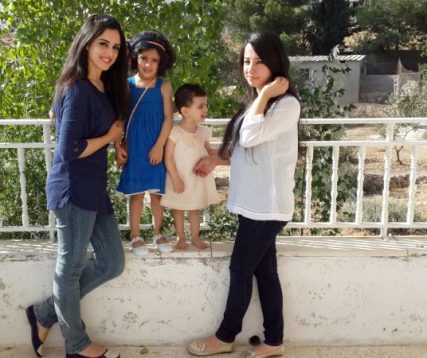 Members of the Dawod family, from left, cousins Haya, 21, Taleen, 4, Dema, 18 months, and Noor, 19, soak up the sun on their balcony during their family’s Eid al-Fitr celebration, which marks the end of the monthlong fast of Ramadan. The Dawods celebrate Eid with a feast of roasted lamb, hummus and locally grown vegetables.

Monday (July 28) marked the first day of Eid al-Fitr, the Muslim holiday that concludes the monthlong fast of Ramadan. Eid is usually a time of celebration — three days of celebration, to be exact.

But this year, the holiday mood in the Palestinian territories is distinctly less joyous and it shows in the Dawod’s buffet. The spread included roasted lamb, “maamoul,” a sweet flaky dessert filled with honey and nuts, and “fawakih,” a fruit platter with grapes, apples, and mangos.

“We usually have more food,” said Dawod, 21, “and more music and games, but because of what’s happening in Gaza we have less.”

This year, the television in the background brings news from Gaza — most recently, of the death of at least eight children as a result of the bombing of Gaza’s Al-Shifa Hospital.

“This Eid is not Eid because of the situation in Gaza,” said Maher Abu Mayaleh, a shopkeeper in the Arab “souk,” or bazaar, in the Muslim Quarter of Jerusalem’s Old City. “We are not happy. We do not want to celebrate anything. Our people are dying.”

The Dawod family’s Eid al-Fitr feast isn’t as bountiful as in years past due to the violence in Gaza, Haya Dawod said.

Eid is traditionally a time when people shop for new clothes, and buy the best meats, sweets, and vegetables for their holiday meals. Families travel to see uncles, cousins, and siblings.

But this year, instead of sweets, people are drinking black coffee without sugar, a sign of mourning in Palestinian culture. Instead of new clothes, people are sending their alms to Gaza. Instead of going on vacation, people stay home, glued to the TV set.

Family is important during Eid and the somber mood affects children and teens alike.

Hamed Hamam’s 7-year-old son, Abed Alkareem, said he is excited to see his family from Ramallah and looks forward to playing with his cousins. But in solidarity with the people of Gaza, the boy said he didn’t want presents or new toys this year.

“Give them to Gaza,” said the boy who lives in Ramallah, a Palestinian city in the West Bank.

Others are trying their best to lend a hand, or an arm.

“I gave blood yesterday to go help the people on Gaza,” said Ahmed Imam, a 16-year-old resident of East Jerusalem’s Sheikh Jarrah neighborhood. “That’s what I did in honor of Eid. It is how I celebrate this year — helping my brothers.”

Surrounded by her female cousins, Dawod said there’s a point “where I even feel guilty when I laugh. My brothers and sisters are suffering.”

But there is still hope for peace and tranquility, she said.

“I saw pictures this morning of people making the cookies, the maamoul, in Gaza and I thought: Wow these people are strong. They gave me hope.”

News
‘I have to find the Mecca of my heart’: Muslims grieve as hajj is drastically limited
Islam
What Muslim digital community organizers learned from a remote Ramadan
News
At Manhattan mosque, an imam eases a pandemic’s grief
Islam
The Best Ramadan Ever? Lockdown makes space for spiritual growth
Articles of Faith
Muslim generosity in Ramadan is more than a feel-good story
© Copyright 2020, Religion News Service. All rights reserved. Use of and/or registration on any portion of this site constitutes acceptance of our User Agreement and Privacy Policy, Privacy Statement and Cookie Notice. The material on this site may not be reproduced, distributed, transmitted, cached or otherwise used, except with the prior written permission of Religion News Service.