ROME (RNS) Meriam Ibrahim, the Sudanese woman sentenced to death for refusing to renounce her Christian faith and then spared after an international campaign, left Italy on Thursday (July 31) on a flight for the U.S., where she plans to build a new life. 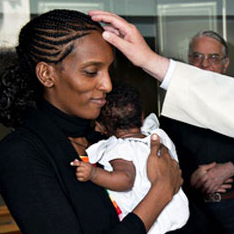 After a visit with the pope last week, Meriam Ibrahim boarded a plane on July 31, 2014, and left Italy for the U.S.

Ibrahim, who met Pope Francis on the first day of her weeklong stay in Rome, boarded an American Airlines flight bound for Philadelphia with her husband, Daniel Wani, and their two young children.

The 26-year-old and her family are expected to join Wani’s brother, Gabriel, and his wife and three children in Manchester, N.H., where they run the nonprofit organization South Sudan Community of New Hampshire.

Ibrahim arrived in Rome last week after a nearly yearlong ordeal that spawned intense diplomatic efforts by the Italian government, U.S. lawmakers and the Vatican. She was forced to give birth to her 2-month-old baby girl, Maya, while shackled in a prison cell in Khartoum in May.

Antonella Napoli, president of Italians for Darfur, said Ibrahim hopes to write a book about her life.

“I am a little afraid to be leaving Rome,” Napoli said Ibrahim told her. “I have learned how to live again and now I do not know what to expect, but we are all together.”

After being welcomed by Italian Prime Minister Matteo Renzi last week, Ibrahim and her family were hosted by the interior ministry and given police protection while they awaited passage to the U.S., Napoli said.

Napoli said the family had visited Rome tourist attractions, including the Colosseum and the Pantheon, and attended Mass last Sunday at St. Paul Outside-the-Walls, a famous Rome basilica.

Sudanese authorities accused Ibrahim of apostasy and sentenced her to the death penalty for converting from Islam to Christianity. She insisted she never converted but was brought up a Christian, although her father, who left the family when she was very young, is a Muslim.