(RNS) Mike Jacobs died this week. If you don’t live in North Texas, you probably don’t recognize the name. He was a guy worth knowing about. 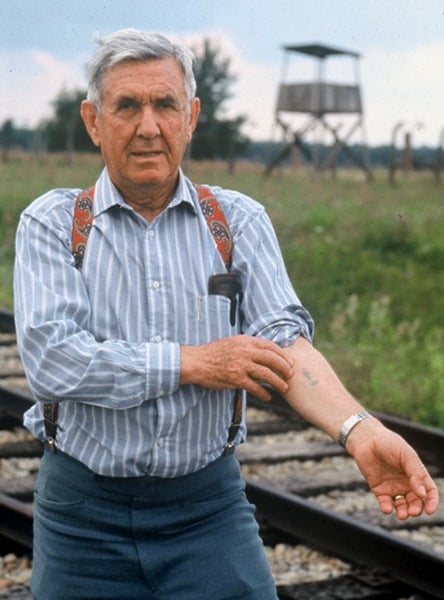 Mike was born Mendel Jakubowicz in 1924, in the Polish town of Konin. He was 15 when the Nazis moved in. He spent his teen years shuttling through ghettos and concentration camps, surviving Auschwitz, Birkenau and Mathausen-Gusen. He weighed 70 pounds when he was liberated by American soldiers.

His obituaries noted what he was best known for: He was the prime driver behind the creation of the Dallas Holocaust Museum/Center for Education and Tolerance. And there surely has been no Holocaust survivor who has spoken to more audiences in person. Over the years, Mike told his story many thousands of times to many hundreds of thousands of people.

Mostly, he talked to kids. There are few people who went to school in the Dallas area over the past 30 years who didn’t hear him at least once. But he also talked to adults.

I saw him give his presentation to students from a local police training academy — experienced cops. They wanted to learn how German police officers were co-opted by the Nazis. Mike’s firsthand account of life under the Nazis was a centerpiece of the day.

He gave very much the same speech every time he spoke. But it never sounded rote.

“When I speak to you, I’m reliving every moment,” he always said. “I’m back in my city.” Holocaust survivor Mike Jacobs was the prime driver behind the creation of the Dallas Holocaust Museum/Center for Education and Tolerance.

His delivery was always matter-of-fact, however, as if he were describing a building demolition. Which made his account of the Germans having Jewish babies thrown out of a window for target practice all the more chilling. The cops squirmed.

So did kids, when they heard the same story.

Back in 2001, with the prodding and help of his wife, Ginger, Mike’s autobiography was published. They simply called it “Holocaust Survivor.” The level of detail of his memories was astounding. He remembered the very prayer he was chanting on Rosh Hashanah in 1939 when the Nazis rolled into Konin and smashed into his synagogue.

I asked him how his recall was so precise of so many small items. He told me that, even at the time, he saw himself as a witness to history. Even as 80 of his relatives were being murdered by the Nazis, he would live to tell the story, he told himself.

But Mike was not simply a witness for the Six Million. His memorial service made that clear. Several hundred people endured a rainy Dallas morning to crowd the synagogue he’d been a member of for many years. And yes, they heard about his Holocaust-related history. But that wasn’t all. Not hardly.

Only a couple of years after he was liberated, Mike had become a competitive soccer player. When he made his way to Dallas, he remained a soccer enthusiast. He was a player, coach and referee for many years and was eventually inducted in the North Texas Soccer Hall of Fame.

He was an entrepreneur before the word was hip, starting and running a successful business recycling scrap metal. (He learned about salvaging metal in Auschwitz.) He met and married Ginger in Dallas. They had four kids. Those kids had kids. And this year, he became a great-grandfather. He loved silly practical jokes, fine wine and filching an extra cookie or two from the sample tray at the supermarket.

The goal of the Nazis was to erase anybody like Mike Jacobs from memory and from the earth. But not only could they not kill him, they couldn’t even defeat him. Yes, he lived to give the lie to Holocaust deniers. But he also proved he could survive the largest and most inexplicable evil in human history and live a normal, productive and happy life.

And that may be his most impressive legacy.

(Jeffrey Weiss is a Dallas-based freelance writer. He can be reached at [email protected] Follow him on Twitter.)