My six year old son was looking at a picture book depicting constellations.

“Look at that,” he said, pointing out Boötes.

“How did someone look at those stars and see a man driving an ox-cart?”

There was wonder, not scorn, in his voice. He is, in a six year old way, a humanist: profoundly enamored of human beings and doings in this world.

A few months ago, I took him to see his cousins perform in a gymnastics show.

“Look at that!” he shouted as one of the more advanced gymnasts did an impressive floor routine.

“I never knew a human could move like that!” he exclaimed.

I am delighted in my son’s open admiration for beautiful things; for remarkable achievements, for good stories. He reminds me, again and again, what surprising, wonderful, creative beings we humans are, and I am better and happier for it.

So I was a bit distressed when, this past week, at a science show hosted by our library, a science teacher from a prominent museum in Philadelphia essentially dismissed constellations as meaningless. 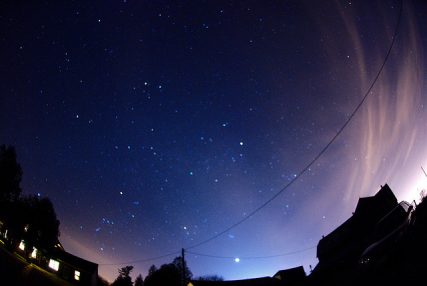 My six year old was one of the seven or so participants, each of whom held a small light and stood together, holding their lights just so to create a constellation.

Then the teacher moved them apart, sending my son to the back of the room and another child to the far front and scattering them in between.

“The stars in this constellation are actually really far apart. They have no relationship with each other. The only connection between them is the one that we humans have made.”

Which is, strictly speaking, true. Except that constellations have had all kinds of significance for human beings — shaping mythology and religion and early scientific inquiry — for millenia. What could be the purpose of declaring that profoundly human activity — making meaning and order and stories from the stars — a delusion?

It was probably for the sake of imparting correct facts that the teacher sought to disabuse the children of the wrongheaded notion that the stars in the Big Dipper have anything to do with one another. Except that in so doing, the powerful — and to my mind, destructive — subtext she was imparting was this:

“don’t trust your perceptions. What relationships and patterns you may see may well be a delusion or illusion. Only science can tell you the truth.”

Now, I may be accused of reading too much into all of this. Perhaps. But I persist, because I feel pretty sure that Inspiring children to study science shouldn’t proceed from a basis of suspicion, as if mythology and religion and literature were just inferior attempts at science, which we’ve only now gotten right, instead of other, significant and beautiful ways to talk about the experience of being human in the world.

I know that many science teachers do not pit their subjects against the humanities, just as many religious communities (and religious scholars) see science as complementing, not competing with, faith. But I still see evidence in both quarters that one is at war with the other, and it needn’t be so. It shouldn’t be so.

I believe that the arts and the sciences will suffer if we fail to impart this powerful truth to our children:

you belong to the order of beings, “a little lower than the angels,” who makes stories from the stars, counts them, learns their names. You are made from the same stuff as stars.