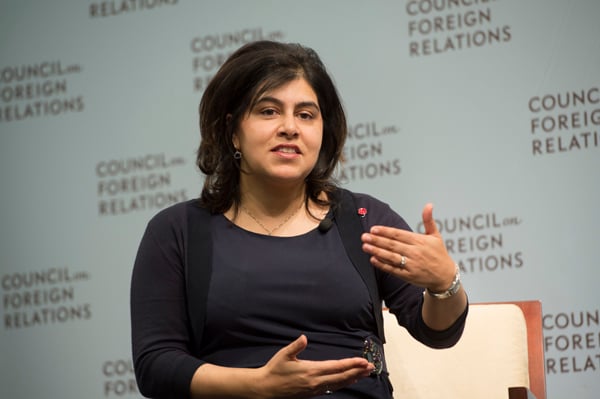 Baroness Sayeeda Warsi, the government's Minister for Faith and the first Muslim member of a British cabinet, said religious freedom is a proxy for human rights and must not be an "add-on" to foreign policy. Photo by Kaveh Sardari/Council on Foreign Relations
August 5, 2014
Brian Pellot

LONDON (RNS) The first Muslim to serve in a British Cabinet resigned Tuesday (Aug. 5) over her government’s “morally indefensible” policies in Gaza and its role in the Middle East peace process.

Baroness Sayeeda Warsi, the government's minister for faith and the first Muslim member of a British Cabinet, said religious freedom is a proxy for human rights and must not be an "add-on" to foreign policy. Photo by Kaveh Sardari/Council on Foreign Relations

Baroness Sayeeda Warsi, who served as senior Foreign Office minister for faith and communities, announced her decision on Twitter, saying: “With deep regret I have this morning written to the Prime Minister & tendered my resignation. I can no longer support Govt policy on #Gaza.”

In her resignation letter, Warsi wrote: “I believe our approach in relation to the current conflict is neither consistent with our values, specifically our commitment to the rule of law and our long history of support for International Justice.”

Conservative leaders expressed disappointment over Warsi's “unnecessary” resignation on Tuesday, while Labour opposition leader Ed Miliband said Warsi had acted with “principle and integrity” in deciding to step down.

In Warsi’s first interview post-resignation, she told Huffington Post: “Our decision not to recognize Palestinian statehood at the U.N. in November 2012 placed us on the wrong side of history and is something I deeply regret not speaking out against at the time.”

She is now calling on Britain to introduce an arms embargo against Israel.

Warsi’s resignation comes the same day Israel and Hamas begin a 72-hour ceasefire with leaders on both sides in Cairo negotiating for a peaceful resolution to the conflict.

Warsi, the daughter of Pakistani immigrants, became the first Muslim minister to serve in a British Cabinet when Cameron appointed her in 2010.

She has been a leading advocate for international religious freedom and has worked on combating hate crimes, anti-Semitism, Islamophobia and Christian persecution in Britain and abroad.