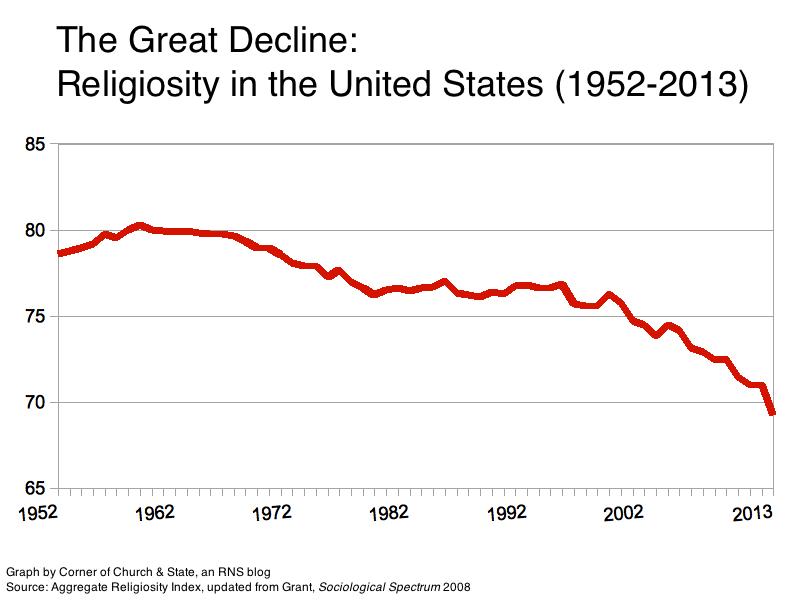 Religiosity in the United States is in the midst of what might be called ‘The Great Decline.’ Previous declines in religion pale in comparison. Over the past fifteen years, the drop in religiosity has been twice as great as the decline of the 1960s and 1970s.

Last year brought a continuation of this decline. 2013 was a new low for the level of religiosity in the country.

How do we track this massive change in American religion? We start with information from rigorous, scientific surveys on worship service attendance, membership in congregations, prayer, and feelings toward religion. We then use a computer algorithm to track over 400 survey results over the past 60 years. The result is one measure that charts changes to religiosity through the years. (You can see all the details of the algorithm here).

The graph of this index tells the story of the rise and fall of religious activity. During the post-war, baby-booming 1950s, there was a revival of religion. Indeed, some at the time considered it a third great awakening. Then came the societal changes of the 1960s, which included a questioning of religious institutions. The resulting decline in religion stopped by the end of the 1970s, when religiosity remained steady. Over the past fifteen years, however, religion has once again declined. But this decline is much sharper than the decline of 1960s and 1970s. Church attendance and prayer is less frequent. The number of people with no religion is growing. Fewer people say that religion is an important part of their lives.

In 2013, we saw continued declines in religiosity. The importance of religion in people’s lives? Down. Church attendance? Down. People who say they are “no religion”? Up. The result: 2013 had the lowest level of religiosity of any year we can measure.

Overall, the hundreds of survey measures point to the same drop in religion: If the 1950s were another Great Awakening, this is the Great Decline.

This is an update of this original post on religiosity from 1952 through 2012. You can see details on five recent Gallup surveys here.

Geek note: Because the index is a combination of different measures with different scales, the index produced by the algorithm does not have a specific scale. The numbers in the graph are roughly analogous to percentages but not exactly the same. The index’s numbers are like degrees Fahrenheit and Celsius, which are arbitrary marks on a thermometer that show the difference between heat levels but not absolute levels of heat show by Kelvins. Differences between two points can be compared with differences between two other points, e.g., the difference between the 1960s and 1980s is a decline of about 1.5 standard deviations, but the difference between the late 1990s and 2013 is about three standard deviations. You can see all the details of how this index is measured here.

Beliefs
Religiosity? What’s in God’s name is that?

Beliefs
The Great Decline: 60 years of religion in one graph
Follow us on Facebook!
Submit your photos to RNS