(RNS) Clutter influences the way you work, the way you live and the state of your soul, too, argues megachurch pastor Bill Hybels.

The pastor of Willow Creek Community Church in South Barrington, Ill., Hybels talks about how to live a life anchored by the priorities that matter most. His answers have been edited for clarity and length.

Q: Your book is about simplifying your life. There are other magazines and books that recommend people simplify their life. What’s especially Christian about that idea?

A: The Bible speaks in several places about how we can misplace our affections. We can get caught up in the deceitfulness of riches. As Jesus was talking to Mary and Martha, he said to Martha, “You are anxious about so many things.” The idea throughout Scripture is that our concerns can be spread over a very wide range of issues, some of which are legitimately important, and many of which are not important in the overall scheme of things. What God is saying is of ultimate importance. Do we organize our lives around what’s most important, or do we dissipate our energies and start thinking there are hundreds of concerns of equal importance that capture our mind and hearts?

A: This is about decluttering your soul. This isn’t about cleaning your basement or buying a new Day-Timer. This is saying, you can have a messy desk and an uncluttered soul and you’re in a better shape than the other way around. Some people walk around with enormous anxiety or their pulse racing and if you say, ‘Are you doing all right at work?’  they’re great. Yet they’re carrying around an unrepaired relationship. Until they get that fixed, they can’t unclutter their lives because relational rifts clutter up our lives and souls. 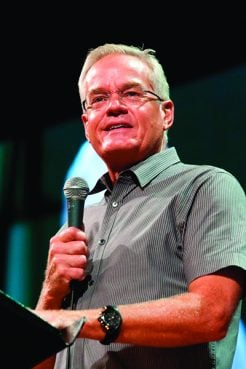 Q: You mention that you’re doing a modified Paleo Diet, focused on meat, nuts, fruits and vegetables. Do you think pastors should be getting more into their congregants’ health?

A: The Apostle Paul says in one of his writings, “Glorify God with your body.” Christ-followers, leaders or nonleaders, who are destroying their bodies by little activity, poor diet, lack of rest, and nobody talks about it, nobody thinks there’s a discipleship issue here. I don’t put this in the ‘Hey, this is the cultural thing to do.’ I say, ‘The body is the temple of the Holy Spirit.’ Why do we say that that imperative does not apply to us?

One of my favorite chapters is about scheduling. The great truth in my mind is that a schedule is not so much about what you have to get done, but who you’re trying to become. That was one of the greatest simplifying revelations of my life. When you put a schedule together, and before you list all the duties and responsibilities, you say, ‘Who do I want to become in the next 12 months?’ You plug in the time it’ll take you, you fill in the rest with what you have to get done. If that subtle shift can be made, you can be helped in dramatic ways.

Q: You suggest that part of simplifying your life might be by pruning friendships?

A: One of the reasons why pastors are a bit hesitant to talk about this is because it’s so easily misunderstood. Yes, Christ-followers are called to love and serve all people. Who is my neighbor? Everybody. Love and serve everybody. However, when it comes to who you walk closely with who fits the qualifications of the wisdom of Scripture, Proverbs says, ‘If you walk with foolish people, you tend to become foolish.’ It doesn’t say don’t love them, don’t serve them. It just says, if you include them in your inner circle and expect them to inspire you to greater levels of devotion to Christ, that’s not going to happen. When Jesus decided who he was going to change the world with, he started with his innermost circle of Peter, James and John. Then he went to the 12, the 70 and the 120. He would not have allowed just anybody into those two inner rings.

Q: Your wife, Lynne, is very involved on Israel/Palestine issues. Where do you stand on the current situation and conflict?

A: I’m heartbroken over the nature of the current conflict. I actually believe that in the 21st century, Jesus called to his followers to be peacemakers as the cutting edge for discipleship around the world. If we can’t speak into conflicts, if we can’t try to bring warring parties together, or if we can’t attempt to be helpful in reconciling those set against each other, we’re not being helpful to the condition of our world. I’ve been challenging myself and my staff to be become better-equipped, better understand what Jesus said, “Blessed are the peacemakers.” 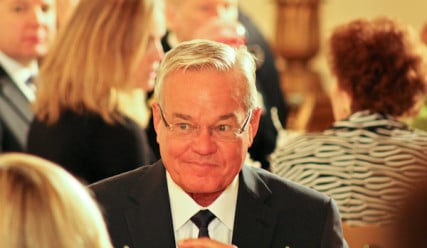 Q: Chicago has a large immigrant population. How does Willow deal with immigrant congregants? What is the next step for the government to do?

A: We have a Spanish-speaking ministry at Willow, and a high percentage of our Spanish-speaking congregation would be undocumented. We deal with this up close and personal every day. You can’t have 11 or 12 million people living in limbo. It’s not a sustainable model to have that many people unsure if there is going to be a path to citizenship. I’ve been to Washington several times. I’ve written op-eds. I’ve talked to our congregation. We make the call to people on both sides of the aisle. This is something legislators have to fix.

Our best role as pastors and Christ-followers is to keep the groundswell of pressure going to Washington, saying we need you to face and resolve these important issues. In the meantime, we have a care center; we provide food, clothing, shelter, employment opportunities, English as a Second Language, dental health, optometry, car repair, and we do so for those who are American citizens and those who don’t have proper documentation.

Opinion
NDAs are a tool for toxic church cultures
Follow us on Facebook!
Submit your photos to RNS