(RNS) The Gideon Bibles are going back in the Navy’s nightstand drawers. 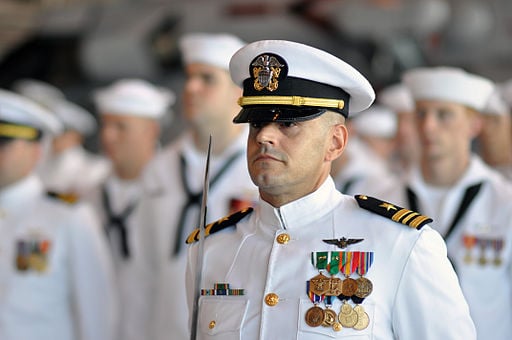 Lt. Cmdr. Jose Arana, maintenance officer for Helicopter Sea Combat Squadron (HSC) 9, stands at attention during a change of command ceremony in the squadron’s hangar at a Naval station.

In June, the U.S. Navy ordered housekeepers at thousands of Navy-owned guest lodges near U.S. and international bases to remove the Bibles and any other “religious materials” from their rooms. Scriptures would remain available on request.

But public outcry, prompted this week by a social media alert from the American Family Association and protests by the Chaplain Alliance for Religious Liberty, led the brass to reverse course Friday (Aug. 15).

Now, the Navy’s “religious accommodation policies with regard to the placement of religious materials are under review,” Navy spokesman Cmdr. Ryan Perry wrote in an email to Stars and Stripes, the daily military newspaper. Meanwhile, the Bibles (New Testament and Psalms but no Hebrew Bible) will be tucked back into nightstand drawers.

A letter from the Wisconsin-based Freedom From Religion Foundation prompted the original order to remove the Bibles. The atheists proposed that the Navy offer Bibles and other texts — including an atheist treatise, “The Born Again Skeptic’s Guide to the Bible” — on request at lodge front desks.

“The bottom line is that the Navy’s preferential treatment of Bibles … shows an unconstitutional preference for Christianity over all other religions and over nonreligion,” Sam Grover, the atheist group’s staff lawyer, told Religion News Service Friday (Aug. 15).  “We are confident that ultimately the Navy will revise its policy to conform with the requirements of the Constitution, which each Navy service member has sworn an oath to uphold and defend.”

FFRF is not only pressing the Navy for change. Grover said the group has sent a similar letter to the Air Force, which removed the Bibles from its lodges in 2012 and returned them after a similar outcry.

News
Lonely no more: Questioning Christians find belonging on TikTok
Follow us on Facebook!
Submit your photos to RNS