VATICAN CITY (RNS) Addressing journalists on his return from his intense five-day visit to South Korea late Monday (Aug. 18), Pope Francis bantered with reporters and lightheartedly said he may only have “two or three” years left to live. 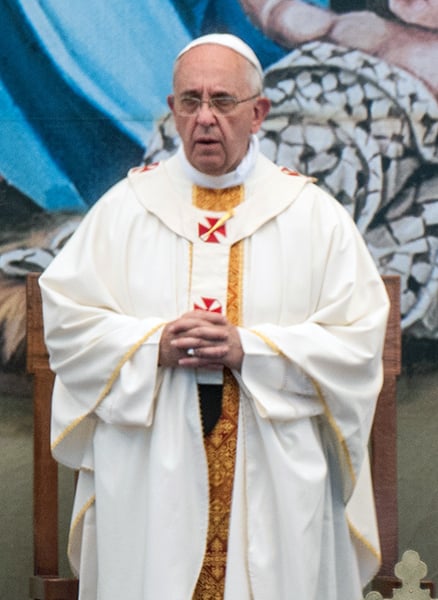 Pope Francis celebrates Mass in Bethlehem during his trip to the Middle East on May 25, 2014.

The 77-year-old pontiff covered a range of topics on the flight back to the Vatican — from war-torn Iraq and his desire to visit the U.S. next year to his personal health, hinting he may retire early.

He was asked how he lived with the immense popularity he has generated around the world, evident when crowds chanted his name on the streets of Rio de Janeiro during his first official visit to Brazil last year.

“I try to think of my sins, my mistakes, so as not to think that I am somebody,” he said. “Because I know this will last a short time, two or three years, and then (go) to the house of the Father,” he said during an in-flight media conference.

Elected in March 2013, Francis has already shaken up the Catholic Church, preaching a message of humility and compassion while moving to clean up corruption and cronyism at the Vatican bank and reforming the Curia.

While he appeared to be in good health, Francis also addressed recent concerns about his well-being and his last-minute cancellation of a visit to Rome’s Gemelli Hospital in June. Years ago he had part of a lung removed, and he reportedly has been troubled by back pain.

“I should have gone to the Gemelli up to 10 minutes before I was there, but I could not do it,” he said. “It is true, they were seven very demanding days then, full of engagements. Now I have to be a little more prudent.”

The energetic pope, who grew up in Buenos Aires, joked about “neuroses” and revealed that his last holiday was a trip outside the Argentine capital in 1975. He said he had recently learned to slow down.

“I change rhythm,” he said. “I sleep more. I read the things I like. I listen to music. That way I rest. In July and part of August I did that.”

The pope reaffirmed his support for former Pope Benedict’s shocking decision to retire and did not rule out a similar move himself.

Pope Francis’ return to the Vatican was marred by news of a family tragedy. On Tuesday (Aug. 19), a road accident in Argentina killed two of his young great-nephews as well as their mother, the wife of the pope’s nephew, the Vatican said.