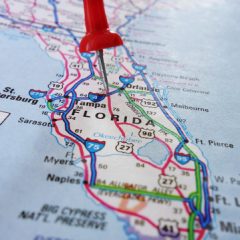 Close-up of a Florida map.

(RNS) A group of county commissioners in Florida is testing a recent Supreme Court decision by banning atheists from delivering an invocation before local public meetings.

Five members of the Brevard County Board of Commissioners voted unanimously Wednesday (Aug. 20) against permitting a local atheist from delivering a prayer or invocation before their public meetings. They also voted to limit remarks from nonreligious people to the “public comments” section of their meetings.

In a letter to David Williamson, founder of the Central Florida Freethought Community, the board wrote, “The prayer is delivered during the ceremonial portion of the county’s meeting, and typically invokes guidance for the County Commission from the highest spiritual authority, a higher authority which a substantial body of Brevard constituents believe to exist.”

Thomas G. Hungar, who argued for the town of Greece, N.Y., speaks to the media after oral arguments at the Supreme Court in Washington, D.C., on Nov. 6, 2013. RNS photo by Katherine Burgess

The commissioners’ move may be intended as a direct challenge to the Supreme Court’s Town of Greece v. Galloway. In that decision, the court ruled sectarian prayers before public meetings do not violate the Establishment Clause as long as they are open to everyone.

The Central Florida Freethought Community says on its website that it is not a proponent of prayers or invocations before public meetings, but will seek opportunities to give them in order to test the fairness of Greece.  The group has scheduled invocations in five other Florida locations, according to its website.