We begin today, as we do most Fridays, with news from abroad:

The United States and its allies have formed a coalition to fight Sunni militants of the Islamic State in Iraq and Syria, the Obama administration said.

Interesting: Iran’s Ayatollah Khamenei has approved cooperation with the US as part of the fight against Islamic State. Iran, of course, is Shiite.

From the Daily Beast we learn that Islamic State militants have outsourced their social media work to Western women who are married to jihadi warriors. These women apparently try to persuade would-be “sisters” in Europe and the United States to travel to the Middle East to help make way for the revolution. 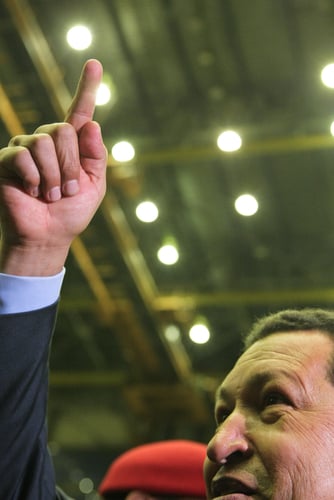 Venezuela’s Roman Catholic Church has admonished the ruling Socialist Party for re-writing the “Lord’s Prayer” into an ode to its beloved late leader Hugo Chavez. As in: “Our Chavez who art in heaven, the earth, the sea and in us delegates.”

The International Christian mission organization SIM announced that missionary doctor Rick Sacra, recently infected with the Ebola virus while serving in Liberia, was flown to The Nebraska Medical Center in Omaha, Neb., for treatment.

Over at the Vatican, former Israeli President Shimon Peres paid a visit and asked Pope Francis to head a parallel United Nations called the “United Religions” to counter religious extremism in the world today.

The pope did not commit to the idea but listened attentively to the 90-year-old Peres, who fancies himself a bit of a peacemaker, too.

He’s no. 6 on Politico’s list of 50 “thinkers, doers and dreamers.” Most are Americans, but the magazine chose to include Francis because of his far-ranging influence. For example, when President Obama was drafting a major speech on income inequality, he sent it back to his speechwriter, asking for a quote from Francis, who had just released a 224-page statement attacking “trickle-down” economics and the “new tyranny” of unfettered capitalism.

And in an opinion piece in The New York Times, Paul Vallely, director of The Tablet, a British Catholic weekly, says liberation theology is being brought in from the cold, thanks, of course, to Francis. 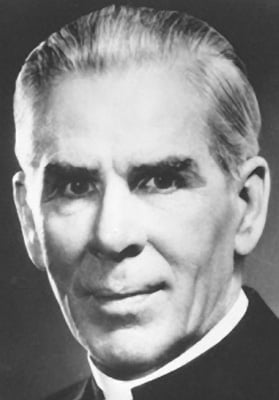 Archbishop Fulton Sheen was well known for his television broadcasts and is now
a candidate for sainthood.

Our own David Gibson, who has been on a roll this week, writes about an unusual public dispute over who holds claim to Catholic Archbishop Fulton Sheen’s body. The dispute pits the bishop of Peoria against the archbishop of New York. Read it, if only for historical details about the legendary Sheen.

Thirty-two states that either allow gay marriage or have banned it asked the U.S. Supreme Court to settle the issue once and for all.

Who says religious people don’t hook up? When Adweek surveyed readers about the “Hottest Ways to Hook Up” it found some unexpected contenders: Christian Mingle and JDate, the Jewish dating site.

Just when you thought churches were staid and creaky, check out these gorgeous photos of modern church architecture in Wired Magazine.

Just in time for the weekend, some good long read recommendations:

A new book shares the stories of 10 courageous nuns, all fighting fights at an advanced age. Jo Piazza, who wrote the book, “If Nuns Ruled the World,” is quoted in the Daily Beast saying:

“These nuns are a dying breed, they’re an endangered species. I find it heartbreaking that they’re diminishing in number.”

Kathryn Joyce has a persuasive and scary piece in Pacific Standard magazine about “biblical counseling,” a practice that rejects conventional approaches to mental health and holds that the Bible is sufficient as a guide to treatment. Let’s just say the results aren’t life-giving.

Rolling Stone has an ominous story titled. “The Forsaken: A Rising Number of Homeless Gay Teens Are Being Cast Out by Religious Families.” We’ve read this before, but this story is still compelling.

Ian McEwan’s newest book is about the clash of religion and science. He writes of a judge who must decide the fate of a 17-year-old leukemia patient, whose parents are Jehovah’s Witnesses and have refused a critical blood transfusion for their son because their faith forbids it. A Q&A.

And finally, two more for the outdoorsy among you. On this week’s 50th anniversary of the Wilderness Act, Michael Schulson, one of our favorite writers, muses on the ways wilderness protection, like so many religious searches, involves a search for an order that transcends human law. “In its own way, the Wilderness Act is a legislative attempt to grapple with the idea of eternity,” he writes.

And if you’ve had too much computer time, even during this short week, David Roberts writes about his efforts to pull the plug and seek health, balance, and adventure in the real world.

On that note, happy weekend, y’all. See you in this space Monday.