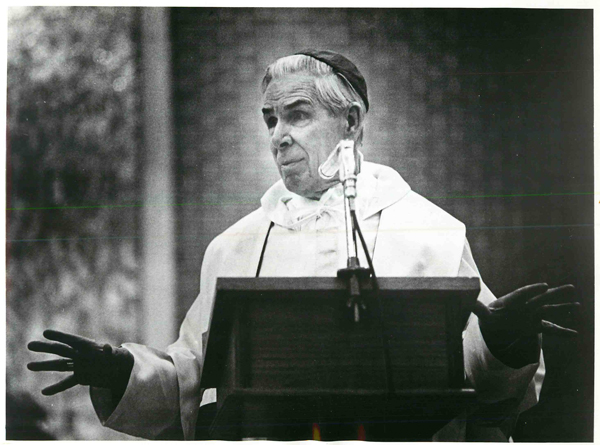 In life, Archbishop Fulton Sheen was exceptional, a riveting Catholic preacher on radio who became more popular than star comedian Milton Berle in the early days of television and winning a following that was the envy Bible-thumping Protestants who thought mass media was their parish. Religion News Service file photo
September 4, 2014
David Gibson

In life, Archbishop Fulton Sheen was exceptional, a riveting Catholic preacher on radio who became more popular than star comedian Milton Berle in the early days of television and who had a following that was the envy of Bible-thumping Protestants. Religion News Service file photo

NEW YORK (RNS) In life, Archbishop Fulton Sheen was exceptional, a riveting Catholic preacher on radio who outpolled star comedian Milton Berle in the early days of television, winning two Emmys and a following that was the envy of Bible-thumping Protestants.

After his death in 1979, it was no surprise that Sheen would be pushed for sainthood. But now two bishops have clashed in an unusual public dispute over who holds claim to Sheen’s body: the Archdiocese of New York, where he is buried, or the Diocese of Peoria, where he was raised and ordained.

The fight between Illinois Bishop Daniel Jenky and Cardinal Timothy Dolan of New York erupted into public view on Wednesday (Sept. 3), when Jenky issued a statement blasting the New York archdiocese for thwarting Sheen’s expected beatification next year by reneging on an agreement to return the late archbishop’s body to Peoria.

“Bishop Jenky was personally assured on several occasions by the Archdiocese of New York that the transfer of the body would take place at the appropriate time,” the Diocese of Peoria said in a statement.

The statement said that senior Vatican officials were set to approve a miracle attributed to Sheen’s intervention -- the revival after an hour of a stillborn baby -- clearing the way for him to be beatified in a few months, the final step before formal canonization, which would require a second miracle.

Rome expected that Sheen’s body would be transferred from the crypt under St. Patrick’s Cathedral, where he is buried, to Peoria to collect relics from the body, the Illinois diocese said. Peoria has been in charge of Sheen’s cause for canonization since it was opened in 2002. In 2012, then-Pope Benedict XVI declared Sheen “venerable,” a requisite first step before beatification. 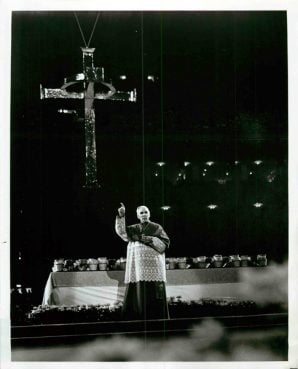 Preaching at a Holy Year service conducted by the Archdiocese of New Orleans in the new Louisiana Superdome, Archbishop Fulton J. Sheen addresses a crowd in excess of 75,000 in 1975. Religion News Service file photo

But the Archdiocese of New York denied Jenky’s request to move the body and “after further discussion with Rome, it was decided that the Sheen Cause would now have to be relegated to the Congregation’s historic archive.”

In other words, Sheen’s cause for sainthood has been indefinitely suspended -- an outcome that left Jenky “heartbroken” and apparently fuming, judging by the tenor of the statement and the fact that he went public with his complaint against Dolan.

On Thursday, the Archdiocese of New York rejected Jenky's claims and said it would be happy to take over Sheen's cause if Peoria balks.

Dolan's spokesman, Joseph Zwilling, noted in a statement that Sheen's own wish was to be buried in St. Patrick's and that his closest surviving relatives also want him to remain there.

While Sheen's family did agree to exhumation, "regarding first-class relics, Cardinal Dolan does object to the dismemberment of the archbishop’s body," Zwilling said.

He said that it was Jenky's decision to shelve Sheen's cause and that if the Vatican approves, "the Archdiocese of New York would welcome the opportunity to assume responsibility for the cause in an attempt to move it forward."

How or whether this fight over Sheen can be settled is unclear. Dolan is a cardinal and past president of the U.S. Conference of Catholic Bishops, and he has influence in the American hierarchy and in Rome that Jenky can’t match.

The Vatican department in charge of advancing Sheen’s cause of sainthood said in a statement Thursday (Sept. 4)  it “does not believe that this will be a lasting impediment." But it added that "it depends upon negotiations between others.” 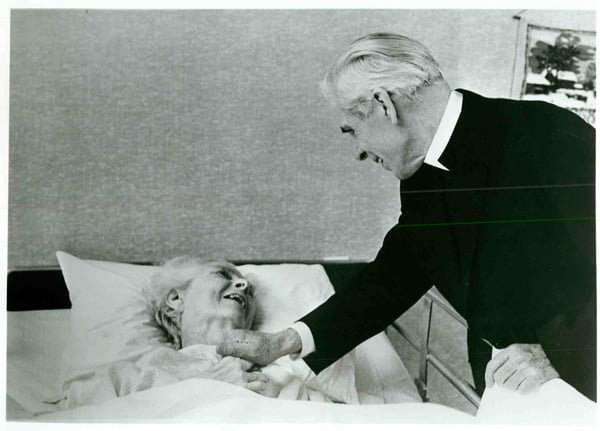 Then Bishop Fulton J. Sheen offers a word of encouragement to a resident at the Lakeshore Nursing home in Rochester, N.Y., in 1968. Religion News Service file photo

Still, this sort of fight is bad publicity for the Catholic Church, and it’s hard to imagine that the American bishops would want to be seen as stomping on sainthood for a candidate like Sheen, who remains remarkably popular even decades after his death.

“We are incredibly saddened and confused by the Archdiocese of New York’s decision to not cooperate with the Sheen Foundation on the cause,” said Bonnie Engstrom, whose son, now almost 4 years old and thriving, was stillborn during a birth at the family’s home in Goodfield, Ill., which is part of the Peoria diocese.

When the baby -- named James Fulton Engstrom -- was born with no pulse, Bonnie Engstrom just sat on her bedroom floor saying Sheen’s name over and over. “That was about as close to a prayer I could get,” she told the National Catholic Register. Her husband, Travis, performed an emergency baptism while waiting for the ambulance, and even at the emergency room the baby was not reviving. Some 61 minutes had passed since his birth and doctors were about to declare the infant dead when he started breathing like a healthy newborn.

The parents were warned that he would have suffered serious organ damage from the lack of oxygen, but he has been fine. Last March, a seven-member team of medical experts gathered by the Vatican concluded there there is no natural explanation for the child’s survival. The cardinals in Rome were expected to confirm it as a miracle attributable to Sheen's intervention.

Sheen stood out among Catholic clergy almost from the time he was ordained in 1916.

He was a star student in theology in Europe and taught theology and philosophy for years at Catholic University of America in Washington.

He also had an appealing youthful appearance complemented by piercing eyes and a powerful voice, and the weekly Sunday night radio broadcast he began in 1930, "The Catholic Hour," quickly became a hit. Sheen eventually had a weekly listening audience of 4 million people, and in 1946 Time described him as “golden-voiced” and “Catholicism’s famed proselytizer.” 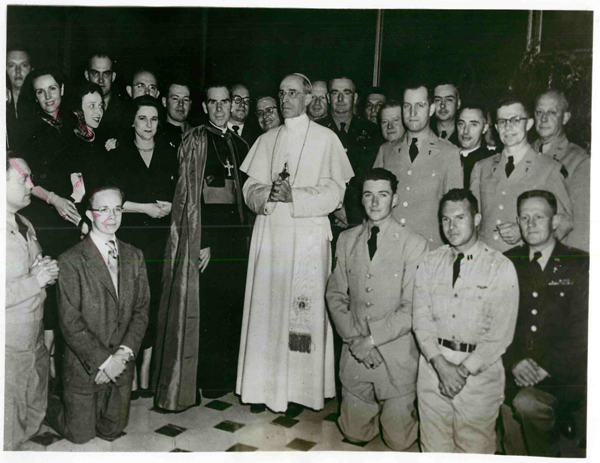 The most Rev. Fulton J. Sheen, then newly consecrated titular Bishop of Caesariana and auxiliary Bishop of New York, center left, appears with Pope Pius XII and a group of Americans after being received in special audience by the Pontiff in 1951. Religion News Service file photo

In 1951, Sheen moved on to television, then a brand-new medium. Sheen’s telegenic presence and smart, precise presentations drew up to 30 million viewers a week to his syndicated show, “Life Is Worth Living,” a remarkable number that bested Milton Berle.

Sheen was not as fortunate in his church career, however. He was made an auxiliary bishop in New York in 1951, serving under the powerful Cardinal Francis Spellman.

But the two had a falling-out in the late 1950s over Spellman’s claims on millions of dollars Sheen was collecting for charity. In a sign of Sheen’s prominence, Pope Pius XII sided with Sheen over Spellman, but the New York cardinal -- who could not abide a rival -- reportedly vowed to get even. He pressured Sheen to leave television and effectively exiled Sheen by naming him bishop of the Rochester diocese in upstate New York in 1966.

Three years later, with Spellman dead, Sheen resigned the Rochester post to focus on media evangelization. But his health began to suffer and he died in 1979 and was buried in St. Patrick’s Cathedral.

Now, even in death, Sheen may not be free of his battles with bishops.