(RNS) U.S. religious congregations are marching to their own drums now more than ever.

The National Congregations Study's latest look at the country's churches, synagogues and mosques -- the third wave of studies that began in 1998 --  finds more congregations:

The study, released Thursday (Sept. 11), draws on interviews with leaders at 1,331 nationally representative congregations and updates data from 1998 and 2006 studies.  Non-Christian congregations were included in the study but there are too few for statistical analysis by topics.

Duke University sociology professor Mark Chaves, who directed the study, said he was “surprised” by how much the acceptance of gays and lesbians has risen since 2006, the first time the study asked about gay involvement in religious congregational life. Congregations that “permit full-fledged membership for openly gay or lesbian couples in a committed relationship” climbed to 48 percent in 2012, up from 37 percent in 2006.

Most congregations still draw a line at permitting gays to take leadership positions, though the number of congregations allowing gays in leadership is rising; it stands at 26 percent, up from 18 percent.

A look by regions shows this liberalization roughly mirrors the state-by-state legalization of same-sex marriage, which began in New England then swept down to the mid-Atlantic and west to California by 2012. The stand-out exception: Only about 4 percent of white conservative evangelical or fundamentalist churches permit gays in leadership roles.

Meanwhile, Roman Catholic churches turned more sharply conservative during the years of the study focus. The percentage of Catholic churches permitting full-fledged membership for gays dropped to 53 percent, down from 74 percent of congregations. And those permitting gays in leadership roles fell to 26 percent from 39 percent. 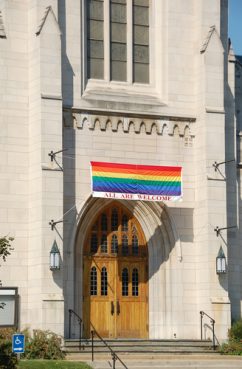 A church with a sign welcoming gay and lesbian members.

The Rev. James Martin, editor at large for the Jesuit magazine America, observed, “During those years, U.S. bishops were much more vocal against gay marriage. It’s only been in the last year or two -- since the election of Pope Francis -- that the church has begun opening up on this."

For women, however, there’s no statistical progress in the NCS study. Despite a handful of recently named women senior pastors, the percentage of congregations with women in the top post has been locked at roughly 11 percent since 1998. Some of America's largest religious denominations -- Roman Catholic, Southern Baptist and Mormon -- do not ordain women.

For diversity, look to the pews, particularly in predominantly white congregations.

In 2012, 11 percent of congregations had an all-white membership, down from 20 percent in 1998. About a third of congregations have some Hispanics and nearly a quarter have some Asians. Behind the change, Chaves said, are factors such as upward mobility by blacks, increasing rates of interracial marriage and immigration.

Still, in an upcoming issue of the “Journal for the Scientific Study of Religion,” Chaves wrote:

Chaves said in an interview, “On the ground, this means there are more white congregations with a smattering of minorities. However, the percent of mainly black churches with some white people is not increasing.”

The NCS also finds distinctive religious denominational brands are losing congregational market share. Nearly one in four congregations -- or 23 percent -- described themselves as nondenominational, up from 18 percent in 1998. Nondenominational churches can have greater leeway in leadership, teachings and style of worship. 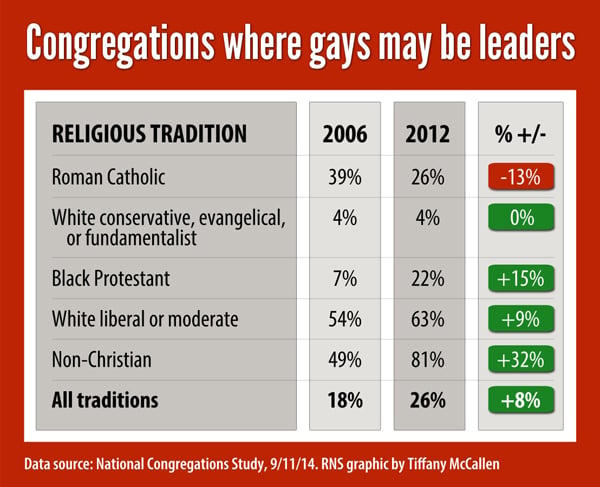 "Congregations where gays may be leaders," Religion News Service graphic by Tiffany McCallen

Look in the aisles for changes in the way people worship. The trend toward informal and entertaining and exuberant worship services, first marked in 1998, continues to climb,  the study finds.

More people now attend congregations where drums are played during the main service --  up to 46 percent in 2012 from 25 percent in 1998. Every tradition from Catholic to Protestant to non-Christian pumped up the beat by 7 to 20 percentage points or more.

The margin of error was  plus or minus 3 percentage points for most findings for the survey.

Eighty percent of people attending black Protestant congregations reported that people jump, shout or dance during the main service, up from 66 percent in 1998.

And this worship-in-motion trend is increasingly true for people who attend white evangelical conservative or fundamentalist congregations (25 percent, up from 16 percent in the first study).

Other groups -- particularly people who worship at white moderate or liberal churches and Catholics -- still keep to their seats.

Although more people attend services where worshippers raise their hands during the main service (59 percent in 2012, up from 48 percent in 1998), all the increase was among Protestants, conservative or liberal.

However, Martin of America magazine observed, enthusiastic worship is growing among Catholics in ethnic congregations where the service “has a different cultural flair. You might see something very different at a Hispanic Mass in Los Angeles than on the Upper East Side of Manhattan. It’s more a cultural divide than a religious one."

But Chaves wondered if all the spontaneous expressions of enthusiasm during worship affects the religious message. He speculates that there’s “more emphasis on generating a kind of religious experience as opposed to teaching religious knowledge or doctrine.” 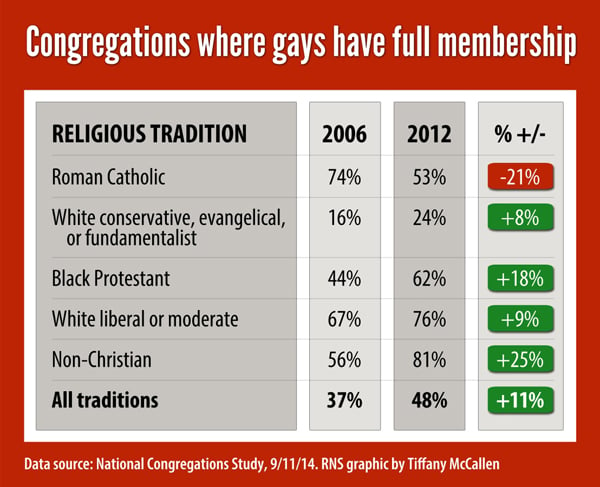 Hardly, countered Marcia McFee, a worship consultant and speaker who coaches subscribing church leaders at her web site worshipdesignstudio.com. She works with mainline denominations and churches on enhancing their services with light, sound and motion.

The Christian message should be a "deeply rich sensory experience," said McFee, so people "can embody that which we proclaim."

Sit-still-and-listen is not the way many people connect with God, said McFee. "For some,  it doesn't feel like a spiritual pursuit unless they're engaged by dancing or drumming or raising a hand or absorbed in rich visuals."

September 21, 2020
Related Posts
By Alejandra Molina
In Oregon, churches and anti-fascists unite to provide mutual aid to fire evacuees and others in need
By Yonat Shimron
Study: Liberal congregations more politically active than conservative ones
By Alejandra Molina
Four young people of different faiths move into a home together, then a pandemic happens
By Jeffrey Salkin
Warning: Your piety might be dangerous to your health
By Alejandra Molina
'Border Church' and 'Border Mosque' team up for prayer service