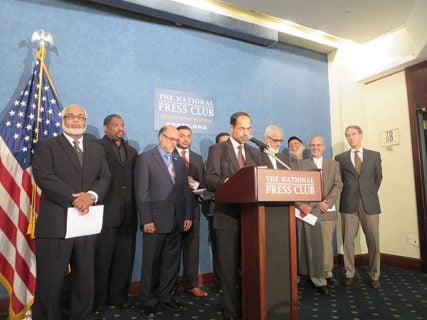 WASHINGTON (RNS) More than 120 Muslim scholars from around the world joined an open letter to the “fighters and followers” of the Islamic State, denouncing them as un-Islamic by using the most Islamic of terms.

Relying heavily on the Quran, the 18-page letter released Wednesday (Sept. 24) picks apart the extremist ideology of the militants who have left a wake of brutal death and destruction in their bid to establish a transnational Islamic state in Iraq and Syria.

Even translated into English, the letter will still sound alien to most Americans, said Nihad Awad, executive director of the Council of American-Islamic Relations, who released it in Washington with 10 other American Muslim religious and civil rights leaders.

Even mainstream Muslims, he said, may find it difficult to understand.

Awad said its aim is to offer a comprehensive Islamic refutation, “point-by-point,” to the philosophy of the Islamic State and the violence it has perpetrated. The letter’s authors include well-known religious and scholarly figures in the Muslim world, including Sheikh Shawqi Allam, the grand mufti of Egypt, and Sheikh Muhammad Ahmad Hussein, the mufti of Jerusalem and All Palestine.

This is not the first time Muslim leaders have joined to condemn the Islamic State. The chairman of the Central Council of Muslims in Germany, Aiman Mazyek, for example, last week told the nation’s Muslims that they should speak out against the “terrorist and murderers” who fight for the Islamic State and who have dragged Islam “through the mud.”

But the Muslim leaders who endorsed Wednesday’s letter called it an unprecedented refutation of the Islamic State ideology from a collaboration of religious scholars. It is addressed to the group’s self-anointed leader, Abu Bakr Al-Baghdadi, and “the fighters and followers of the self-declared ‘Islamic State.'”

But the words “Islamic State” are in quotes, and the Muslim leaders who released the letter asked people to stop using the term, arguing that it plays into the group’s unfounded logic that it is protecting Muslim lands from non-Muslims and is resurrecting the caliphate — a state governed by a Muslim leader that once controlled vast swaths of the Middle East.

“Please stop calling them the ‘Islamic State,’ because they are not a state and they are not a religion,” said Ahmed Bedier, a Muslim and the president of United Voices of America, a nonprofit that encourages minority groups to engage in civic life.

President Obama has made a similar point, referring to the Islamic State by one of its acronyms — “the group known as ISIL” — in his speech to the United Nations earlier Wednesday. In that speech, Obama also disconnected the group from Islam.

Enumerating its atrocities — the mass rape of women, the gunning down of children, the starvation of religious minorities — Obama concluded: “No God condones this terror.”