“We believe that, following the lead of Pastor Danny Cortez, New Heart Community Church has walked away from the Southern Baptist Convention’s core biblical values,” said Roger Oldham, a spokesman for the committee.

Oldham said Cortez attended the meeting and indicated that he had officiated at a same-sex wedding. 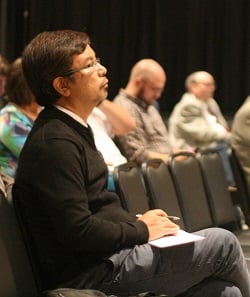 The denomination has cut ties to churches that endorsed homosexuality before, but this may be the first time that its Executive Committee has withdrawn fellowship from a church on behalf of the denomination. The move came less than two weeks after the California Southern Baptist Convention’s Executive Board voted unanimously to withdraw fellowship from the congregation because of Cortez’s announcement that he affirmed gays — including his teenage son — and his church had taken a “third way” on homosexuality.

Cortez could not immediately be reached for comment about the SBC Executive Committee vote.

After the California convention board’s vote on Sept. 11, he said: “We want to make it clear that while our hope has been to stay within the SBC denomination, we nonetheless hold them dearly as our brothers and sisters in Christ. We ask that God bless them, and bless us, as we all attempt to navigate this very difficult period of church history.”