One of the posters featuring quotes and reflections from prominent British humanists.
September 25, 2014
Trevor Grundy

CANTERBURY, England (RNS) A campaign to persuade millions of people to understand humanist ways of answering life’s big questions without religion has been launched at 100 of London's 270 underground subway stations. 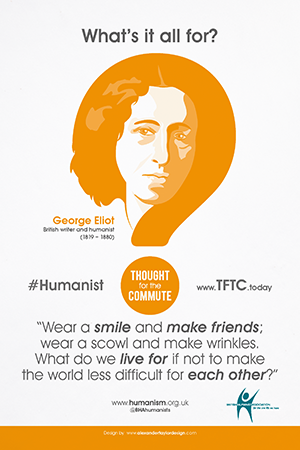 One of the posters featuring quotes and reflections from prominent British humanists.

Posters will encourage Tube commuters to think about the meaning of life under the question "What’s it all for?" while presenting views from four famous humanists: novelists George Eliot and Virginia Woolf and philosophers Bertrand Russell and A.C. Grayling.

While going to and from work, London’s 3.5 million commuters will be encouraged by the British Humanist Association (BHA) to tweet their own answers to life’s big questions, along with selfies from their favorite posters.

"Despite over half the population in the U.K. describing themselves as nonreligious, humanist perspectives on life’s big questions are still far less available to the public than religious ones," said BHA Chief Executive Andrew Copson.

"Most nonreligious people are happy and secure living ethical and fulfilling lives on the basis of reason and humanity. To them, hopefully, we are just providing something interesting to think about amid the daily grind."

Copson said the Thought for the Commute campaign was partly a retort to the BBC's Radio Four "Thought for the Day" program, which also talks about life’s big issues but always from a religious point of view.

"Given the BBC's funding, we are a bit of a David against their Goliath, but hopefully people will be inspired to realize that the religious views often broadcast at them are not the only ones."