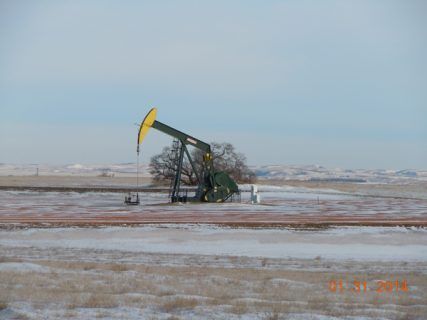 North Dakota has passed Alaska in domestic oil production and is now second to Texas, and daily production by 2017 is expected to nearly triple to 1.2 million barrels. Photo courtesy of Diocese of Bismark

(RNS) Sven Hauge goes every Thursday to the “man camps” surrounding the oil fields near Williston, N.D., and holds worship services that feature preaching, praying and singing. Sometimes a few men show up, and sometimes, nobody does.

“That can be discouraging if you put great importance on counting heads,” he said. “But most of us have learned that it isn’t about numbers. It’s about doing what the Lord has called us to do and being faithful about it.”

Three years ago, Hauge heard God calling him and other members of the Christian Motorcyclists Association to minister in the booming Bakken oil fields, where hydraulic fracturing and horizontal drilling pump out more than 450,000 barrels of oil a day.

North Dakota has passed Alaska in domestic oil production and is now second to Texas, and daily production by 2017 is expected to nearly triple to 1.2 million barrels. The United States Geological Survey estimates that 7.4 billion barrels of oil will be recovered before the boom plays out, and that’s already making the United States less dependent on foreign oil.

It takes a lot of people to fuel the boom — thousands of them coming to towns like Williston and Watford City, which are now stretched to meet the needs of this mostly transient population. Some live in rows of man camps on the prairie; others park RVs in makeshift campgrounds or live in their cars. Few can afford housing in town.

The hard-working, lonely and boring lifestyle lends itself to all manner of sin and vice, and that makes it prime territory for an itinerant evangelist like Hauge. The results have been awesome, he said. Not big, but awesome.

“What’s one soul worth?” said Hauge, who said he’s seen half a dozen men commit to following Jesus. “If you ask that question, it makes it all worthwhile.”

Robert Newberry, carrying a cross far left, and his wife, Stephanie, came up from Missouri nearly three years ago and settled into Watford City, where the population has exploded from 1,700 to 8,000 or more. Newberry is a licensed minister, evangelist and preacher and calls himself a Bible-believing, Scripture-quoting, sword-wielding spiritual warrior itching to go into battle. Photo courtesy of Robert Newberry

Robert and Stephanie Newberry came up from Missouri nearly three years ago and settled into Watford City, where the population has exploded from 1,700 to 8,000 or more. He’s a licensed minister, evangelist and preacher and calls himself a Bible-believing, Scripture-quoting, sword-wielding spiritual warrior itching to go into battle. It’s not like he hasn’t fought these demons before.

Newberry, a self-described former bad dude from Georgia, survived childhood abuse, addictions, gangs, homelessness and incarceration. At one time he was alone, destitute and suicidal.

Many men drawn to the oil fields are rough-and-tumble like he was, so he understands their lives and where they came from.

“I’m here to let people know that God is here and he loves them,” he said. “I talk to a lot of people and, yeah, they heard about God, but they don’t know what to believe. They don’t even know if God is real.”

Newberry provides Bibles, shelter, food and gas money for the men to get to and from work. He leads Celebrate Recovery, an ecumenical worldwide ministry to addicts that’s “kind of like AA and NA meets Jesus.” When invited, he’ll preach at local churches.

“To be honest, I really didn’t want to be here,” he said. “The idea of 50-below-zero weather didn’t appeal to me, but God wouldn’t leave me alone. He kept trying to get me to open my eyes and see what he wanted me to do. I finally gave in.”

The Overnighters Trailer from Drafthouse Films on Vimeo.

Jim Konsor arrived from South Dakota in 2012 to mine an igneous rock used in the oil fields. “I heard some pretty tough stories,” he said. “There were so many needs.”

Like a scene out of the old Wild West, people arrive with broken dreams and high hopes. They hear that you can make $80,000 a year, but then realize that’s only for skilled workers employed directly for the oil companies. Laborers more likely make $20 an hour or less, which doesn’t go far when monthly rent on an apartment can go for $2,500 or more.

Those stories touched Konsor’s heart. “God told us to love our neighbors as ourselves, and to feed the hungry and take care of the least of our brothers in need,” he said.

He returned to Watford City with his wife, Kathie, in April 2013 and met with pastors, community leaders and social service agencies to see what they could do. They asked the Dakotas Annual Conference of the United Methodist Church for $100,000 — and got $270,000.

The couple drives a 29-foot converted RV stocked with donated household goods, clothing, blankets, coats and shoes that they give away. One of the recipients was a pair of cousins, living in an RV with their husbands and children, 12 of them in all.

There are times, Konsor said, when he tells people that it would be best if they just went back home.

Churches around town are holding Bible study groups, activities and fellowship for men, women and children. “If we position ourselves properly, we will be able to show them Jesus,” said Jeff Ruggles, pastor of CrossPoint Church in Watford City.

The local Catholic parish struggles to meet a surge in demand for all manner of sacraments.  “You might have 15 men who want to be part of the men’s group, but they can’t make it because of their schedules. They might not be able to attend Mass on weekends, and will come on days when they can,” said the Rev. Brian Gross of Epiphany Catholic Church.

“There’s definitely an increase in people coming to the door,” he added. “They need money because they can’t get a job, or they need money for gas or for a bus ticket back home.”

The locals, too, wrestle with the changing nature of their communities — overtaxed roads, schools, services. Some churches, like CrossPoint, are expanding to meet the need. But no one knows when the boom will go bust. “Where are we going to be 10 years down the road?” Gross wondered.

For now, the churches and traveling evangelists say they’ll focus on the most immediate needs in front of them — spiritual, physical or otherwise.

“We have a sense for the right harvest,” Ruggles said. “In their struggles, we tell them, ‘Here’s the answer: You need Jesus.’”