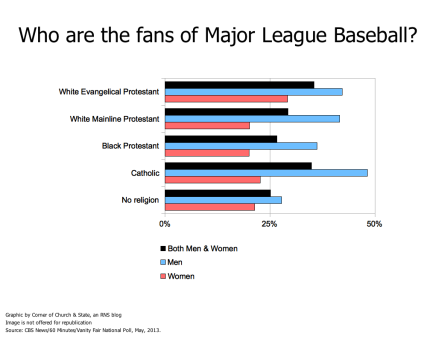 "Baseball is like church: many attend, but few understand." -- Wes Westrum

Derek Jeter's finish to his baseball career is proof positive for the existence of God. At least that's how many baseball fans are going to interpret it.**

A few key findings from the poll:

Baseball may be the national pastime, but CBS News poll last year found that a third of Americans are fans of Major League Baseball. While the size of the fan-base may seem low for our "national pastime," that's not necessarily the case. It turns out that baseball has never had a majority of Americans as fans. Sure, most men in the 1950s followed the game, but women were not big fans.  Today, women are more likely than in earlier decades to follow the sport. Gallup found the fan-base is the same today as in the 1930s and 1950s. Our memory of baseball uniting American culture is, perhaps, a view we get from looking through men's lenses.

** Except maybe in Boston. In St. Louis, the Cubs record is already seen as proof of divine retribution.