My nominee for 2016 person/deity of the year is Satan (aka Lucifer, Beelzebub, and the Devil).

Sure, there were other more important religion and politics stories this year. But never before has Satan been as visible–or as successful–in politics.

Satan first made news by seeking the Republican nomination for president by taking on the form of Sen. Ted Cruz (R-TX).

This incarnation was first reported by former House Speaker John Boehner in March. He reiterated it to an audience at Stanford University. When asked his views of Cruz, Boehner answered that Cruz was, “Lucifer in the flesh.”

Cruz, of course, failed to win the Republican nomination. But at the Republican convention, Ben Carson revealed another way Satan could enter the White House via Hillary Clinton. According to Carson, Hillary wrote about Saul Alinsky in her college senior thesis. Alinsky wrote Rules for Radicals, a book that Carson said included Lucifer on its dedication page.

Carson asked the convention to ponder the implication of this:

Yes, think about it. It’s a clever route to the White House, particularly since Clinton wrote about Alinsky two years before Rules for Radicals was published. Also, the book doesn’t include Lucifer on a dedication page but as a literary allusion on an epigraph. So, it’s not a straight line from Hell to Pennsylvania Avenue, but it’s a line nonetheless. That’s how tricky Lucifer is.

Which made it all the more frustrating when Donald Trump won the presidential election.

But Satan had one more tactic. It’s one of the devil’s most effective: the offer of power. And the person to take the offer was former Breitbart executive chair Steve Bannon. Following the election, Trump named Bannon to be chief strategist and Senior Counselor in the new administration. In an interview with Hollywood Reporter, Bannon cited Satan as the archetype of power he sought.

“Darkness is good,” Bannon said. “Dick Cheney. Darth Vader. Satan. That’s power. It only helps us when they get it wrong. When they’re blind to who we are and what we’re doing.”

Not all were pleased with Bannon’s dark reference.

Church of Satan’s Peter Gilmore said in a statement stated that Bannon is right: Satan and darkness are positive power.

“Yet Satan also embraces iconoclasm and libertine indulgence not usually in the alt-right platform. We suspect as Lord Vader’s next apprentice Bannon will have much to learn,” Gilmore said.

That’s 2016. It is the year Satanists praise a White House strategist for embracing the dark side but distance themselves because he’s a nazi.

Note: The one unanswered question in 2016 is what role of Satan played in the Cubs World Series victory. Despite the elimination of the “curse of the goat,” there is no direct evidence of any diabolical involvement. Fans in of the St. Louis Cardinals (including the author) remain skeptical. 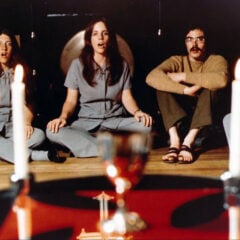 Arts & Culture
Are Christian hymns too warlike? (COMMENTARY)
Follow us on Facebook!
Submit your photos to RNS