(RNS) Nearly nine years ago, I lay in a hospital bed with a sleeping baby in my arms, engulfed by fear. Mine wasn’t the typical anxiety of new mothers. We had just received a diagnosis of Down syndrome for our daughter Penny, and for a while I felt as though I had been swept out into an ocean. I looked around and all I could see was a vast expanse of open water, with no landmarks and no familiar ground upon which to stand.

Many of my fears dissipated with time. As Penny became herself — a sweet and sometimes exasperating child with beautiful green eyes, a winning smile and a love for reading and music and people — her diagnosis faded into the background of our lives, and along with it faded my fears about her life expectancy, her ability to achieve developmental milestones and whether we would be able to love her with our whole hearts.

But beginning in the hospital and throughout the years I have returned to the fear that Penny would not ever make friends.

Friendship exists outside the understood structure of families, in which siblings and parents relate to one another by default. Friends choose each other, and I always wondered whether anyone outside of our family would choose Penny.

I tried to orchestrate play dates, and for many years those felt more like spotlights on my inadequacy rather than building blocks for lifelong relationships. I’m not inclined to create fun projects for 4-year-olds, so I often found Penny’s classmates playing with her younger brother William while she secluded herself with a book on the couch. And I worried about what might happen if she went over to other children’s houses.

I tried praying about it, too. I created a prayer card filled with the ups and downs of three moves to new towns in as many years. Notes about the day Penny walked home from school hand in hand with Anna, only to say goodbye when we moved a few months later. Or about the mom who invited Penny over — a very specific answer to prayer — and I dreamed of her daughter and mine together until the second move nipped that friendship in its proverbial bud. I lost the prayer cards during move number three and have yet to re-create them. Like my feeble attempts at hospitality, prayer only underscored my helplessness at facilitating friendships for my daughter.

And maybe that’s as it should be.

Maybe my posture needed to be one of helplessness in order to become a place of hopefulness. 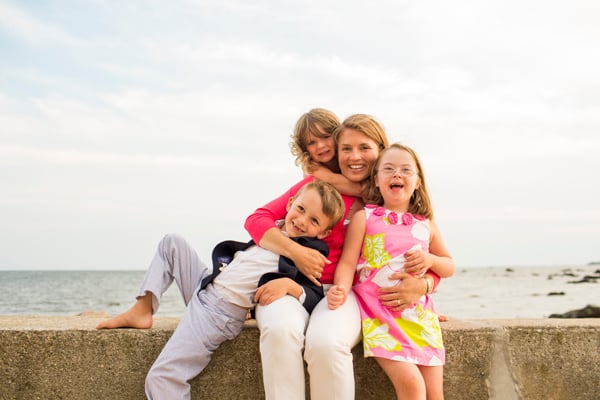 A family portrait for Amy Julia Becker’s upcoming book, “Small Talk: Learning From My Children About What Matters Most.” Photo by Christopher Capozziello, courtesy of Amy Julia Becker

We have now lived in the same town for over two years. Penny gets on the bus with the same kids every day and goes to a small elementary school down the road. When I pick her up, other students wave and shout her name with delight. She has been invited over to three friends’ houses in the past month. We’ve had a number of kids visit our home. For the most part, these relationships are developing naturally.

I’ve coached Penny on how to interact — she’s still inclined to curl up with a book if she doesn’t like her playmate’s suggestion for an activity — and she’s learning how to assert herself and how to be a little more flexible. But she and her friends have also discovered shared interests — handstands and Disney’s “Frozen” and monkey bars and playing “teenager.”

News outlets often introduce people like Penny as someone who “suffers from” Down syndrome. Most individuals with Down syndrome, however, would describe their lives as happy. Yet, many would also say that if they suffer from anything, it is from social alienation and exclusion.

Friendship is perhaps the most important way to alleviate the suffering of people with Down syndrome and similar conditions.

Before Jesus died, he told his disciples that he no longer called them servants, but friends. He crossed the divide from the spiritual realm to the corporeal one and chose friendship with individual human beings.

October is National Down Syndrome Awareness Month. It presents an opportunity for families  to choose friendship. Such friendship will only happen if we believe people with Down syndrome have something to offer, if we are willing to believe that a true relationship of equals is possible.

I have received far more laughter and love from my daughter than I have given her. I believe her friends are starting to receive these same gifts, and I have begun to trust that their relationships of mutual giving and receiving will continue for many years to come. Nearly nine years after that first fearful day in the hospital, I am grateful for the movement from fear to friendship, from helplessness to hope.

(Amy Julia Becker is the author of “Small Talk: Learning From My Children About What Matters Most,” which will be published by Zondervan on Oct. 28. For more information, visit http://amyjuliabecker.com.)