WASHINGTON (RNS) If you are a Christian who doesn’t smoke, abstains from sex outside your heterosexual marriage and can get your priest to vouch that you go to church at least three times a month, you may qualify for a new Catholic alternative to health insurance.

Taking a cue from evangelicals, a group of traditionalist Catholics on Thursday (Oct. 2) unveiled a cost-sharing network that they say honors their values and ensures that they are not even indirectly supporting health care services such as abortion that contradict their beliefs.

Christ Medicus Foundation CURO, as the group is called, will be financially integrated wi

h Samaritan Ministries International, which was launched in 1991 by an evangelical home-schooling dad. The SMI network now serves 125,000 people and is exempt from the Affordable Care Act.

“Think about the Gospels and how the Apostles lived,” said CMF CURO director Louis A. Brown Jr. at the program’s Washington, D.C., debut. “They very much shared and cared for each other. And we’re saying: ‘Catholics, you can do that too.'”

CMF CURO was founded independent of the U.S. Conference of Catholic Bishops; officials there did not offer comment on it.

Proponents of “health care sharing” say they are not insurance plans, but ministries that cut Christians’ health care costs and tend to their souls. The groups, according to the Illinois-based Alliance of Health Care Sharing Ministries, together include more than 300,000 Americans. 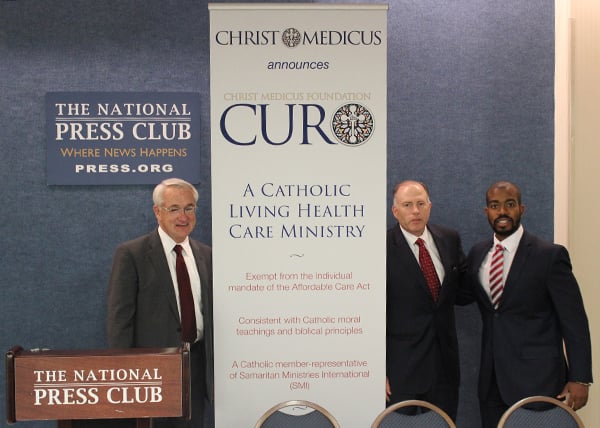 Mike O’Dea, David Wilson and Louis during the CMF CURO presentation at the National Press Club. Photo by Chris Sullivan

Critics point out that health care sharing programs are unregulated and that there is no guarantee that any particular medical need will be covered. As Jonathan Gruber, a health care economist at the Massachusetts Institute of Technology, told CNBC: “The whole goal of health care reform is to ensure that people are protected against risk and illness, and this violates that fundamental goal.”

As with similar programs, those who join CMF CURO expect other members to pay for most of their medical costs — except preventive health care and pre-existing conditions — for expenses of up to $250,000 for each medical need in the basic program. For a two-parent household, CMF CURO costs $489 a month; an individual plan costs $264 a month. Members vote on whether to raise the costs of membership, and the program will pay health care providers 125 percent of what they get from Medicare.

And as members of Samaritan and other health sharing networks have testified, CMF CURO members can also expect notes, cards and drawings from the children of fellow members with prayers for a speedy recovery, said Anthony Hopp, SMI’s director of membership.

Given its standards for members’ conduct, the group won’t accept all Christians. And many who do qualify may not choose CMF CURO as their exclusive means of paying for health care. (“Curo” is Latin for “to care for.”)

The co-founder and executive director of the Christ Medicus Foundation, for one, said he is not a member of CMF CURO and is not sure he will become one. As a veteran, “I have all my health care through the VA,” said Michael J. O’Dea, who also advised Catholics who join CMF CURO not to drop their Medicare coverage.

“They pay for it throughout their life and I wouldn’t want to pass that cost on to Samaritan,” O’Dea said.

And CMF CURO co-founder David E. Wilson, the first person to enroll in the new program, said he’s keeping the more conventional insurance he provides himself and his employees at his consulting firm, though he doesn’t anticipate using it. “I have full confidence that CMF CURO is going to cover all my needs,” he said.

Brown said that as the director of CMF CURO, he plans to rely on it exclusively when the plan begins paying for medical expenses on Jan. 1.

The introduction of CMF CURO comes as President Obama’s 2010 health care overhaul continues to reduce the ranks of the nation’s uninsured. Obamacare, as its critics call it, requires almost all Americans to carry insurance or pay a penalty.

Its most vocal critics have been conservative Christians and the U.S. Conference of Catholic Bishops, who object especially to the ACA’s requirement that insurance plans offer contraception, including methods that opponents (but few doctors) consider abortifacients.

Hobby Lobby President Steve Green won the right not to cover such birth control methods at the Supreme Court this summer. But a provision was written into the ACA that health sharing groups are exempt as long as they were founded before Dec. 31, 1999. CMF CURO’s partnership with SMI allows it to invoke this exception.

But Brown said he doesn’t want people to sign on to CMF CURO just because they don’t like the Affordable Care Act.

He called it “a real solution that gives Catholics and people of faith affordable access to Christ-centered health care, consistent with Catholic teaching, that’s protective of the individual right of conscience and religious liberty writ large.”