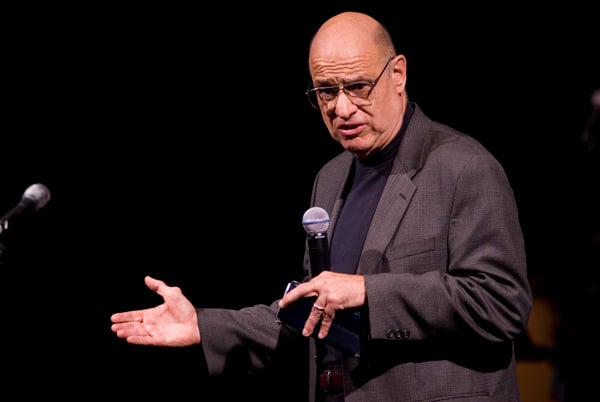 (RNS) Bart Campolo decided he was no longer a Christian after being injured in a bike accident in 2011. But he waited until last Thanksgiving to break the news to his father, Tony, an influential evangelical leader and author who is famous for having been a spiritual adviser to former President Bill Clinton.

Following the family dinner, Bart sat his parents down and explained that he was now an agnostic humanist. His father’s response was surprising.

“You know me. I am not afraid you’re going to hell because the God I believe in doesn’t send people to hell for eternity for having the wrong theology,” Tony responded, according to Bart. “I’m sad because Christianity is my tribe, and I liked having you in my tribe. ”

Looking back now, the elder Campolo said he doesn’t remember what he said, but describes the conversation as “upsetting” and “traumatic.” Even though Tony says he believes in hell and “Jesus is the only way to salvation,” he won’t speculate on his son’s eternal destiny.

“I leave judgments in the hands of God," Tony said. "I don’t know what’s going on in Bart’s heart or mind or soul. I have faith in God and I have faith in prayer, and I have confidence that this thing is not over until it’s over.”

The two remain close despite their theological differences and speak on the phone regularly. They are even co-authoring a book together that Tony says is tentatively titled, “A Painful Dialogue Between an Evangelical Father and His Agnostic Son.”

But Bart’s rejection of his father’s faith shouldn’t come as a total shock to those who’ve been watching his life and ministry.

“I passed just about every stage of heresy on my way to apostasy,” Bart said. “It wasn’t until I exhausted every option for staying a Christian that I gave it up.”

The younger Campolo recounts becoming a Christian in high school. He says he was drawn by the sense of community and the common commitment to love people, promote justice, and transform the world.

“All the dogma and the death and resurrection of Jesus stuff was not the attraction,” Bart said.

His first step away from orthodoxy occurred while doing inner-city ministry near Philadelphia. Bart encountered a girl who had been gang-raped at age 9 and who rejected Christianity after her Sunday school teacher said God could have stopped the act but allowed it for a reason.

Bart decided that if he was going to remain a Christian, he had to believe that God did not authorize that child’s rape and was not in control of the world. He began to imagine God as engaged in a battle with good and evil rather than a cosmic marionette pulling the universe’s strings.

The next rejection occurred as a student at Haverford College in 1981, when two of Bart’s roommates came out to him as gay. Though evangelical Christian teachings repudiated same-sex orientation at the time, he chose instead to jettison the biblical verses that spoke negatively of homosexuality.

“I decided I was going to make room for gay people in my theology, and I became very open about the fact that I would ignore certain Bible verses and underline others,” he said.

Having rejected the sovereignty of God and authority of the Bible -- two cornerstone Christian beliefs -- he was already substantially outside the evangelical fold. But then Bart committed what many would call an unpardonable sin: He became a universalist. He simply couldn’t fathom a God who would condemn his nonbelieving friends to hell for eternity.

“I was only interested in a God who would save everybody,” Bart said. “It didn’t matter that the Bible had some verses that said something different.”

This unholy trinity of Christian rejections sent Bart into a spiritual tailspin. He was thrown out of conferences and churches for preaching unorthodox beliefs. Then he published an article in “The Journal of Student Ministries” laying out his scandalous theology. After vicious pushback and cries of “heresy,” the article was pulled.

“I started rejecting the supernatural stuff, the orthodoxy. I no longer believed God does miracles or that Jesus was raised from the dead or that other religions were false,” he said. “My Christianity had died the death of a thousand nicks and cuts.”

But it wasn’t until the biking accident in 2011 that Bart lost whatever remained of his tattered faith. “While recovering, I thought, ‘When this body dies, I think that will be the end of Bart Campolo. I don’t think I will be going anywhere. I don’t believe in eternal life in that way anymore.’”

Today, Bart serves as the humanist chaplain at the University of Southern California. He is only one of a few individuals in such a role on a U.S. campus.

The university's humanist community is neither orthodox nor theistic, but he believes it will still be a place of hope. Bart said he wants to create a humanist community that Christian people can celebrate -- what he calls “a church for people who don’t believe in God.” He wants to create experiences with inspirational talks, uplifting music, service opportunities, and perhaps even potluck suppers.

“One thing I learned from Jesus was that if you want to gain your life, you have to lose it for the sake of the gospel,” Bart said. “I may have a different gospel now, but I want to give my life to it. I still have good news to share.”

As it turns out, you can take a man out of the ministry, but you can’t always take the ministry out of a man.

(Jonathan Merritt is senior columnist for Religion News Service. He is author of "Jesus is Better Than You Imagined" and "A Faith of Our Own: Following Jesus Beyond the Culture Wars." He lives in Brooklyn, N.Y.)