(RNS) As small bands of protesters from Westboro Baptist Church take their trademark “God Hates Fags” signs to demonstrations outside funerals, concerts and schools across the country, a new message has come to their Topeka, Kan., headquarters: “God loves gays.”

The God Loves Gays Billboard Project launched Aug. 9, 2014 on the crowdfunding site Indiegogo and a billboard reading “God Loves Gays,” with a cartoon God peaking out of white fluffy clouds and a giant rainbow, went up on Sept. 8, 2014 in Topeka, Kan. Religion News Service photo by Sally Morrow

The God Loves Gays Billboard Project launched Aug. 9 on the crowdfunding site Indiegogo, aiming to raise $50,000 to put up a sign about three miles from the church. Organizers hoped to reach the goal by Oct. 8 but surpassed it about a month and a half early.

On Monday (Oct. 6), the campaign reached $100,000, two days after the announcement that there is space for another billboard, this one in Salt Lake City, the heart of Mormon country.

The project shows the power of harnessing online media — in this case, a crowdfunding site such as Indiegogo — to push back against religious hate speech from a reviled source.

The Topeka billboard, with a cartoon God peeking out of white fluffy clouds and a giant rainbow, went up on Sept. 8, more than a month ahead of schedule.

The campaign’s owner identifies himself (or herself) simply as “God” but also responds to the names “G.M. (Galactic Manager) of the Milky Way Galaxy, The LORD, The Alpha and the Omega, or The Creator.” Beyond that, the true identity of the organizer remains unknown.

According to one of Westboro’s official Twitter accounts, church members have already brought their well-known signs to protest in front of the billboard. They also added this message to the front of their church sign: “Billboards and rainbows do not change: God hates fags! Romans 9:13.”

This isn’t the first time that the church founded by the late Rev. Fred Phelps has faced counterprotests that took root online. Communities across the country have created “human walls” to form a barrier between protesters and funeral services and have crafted humorous signs such as: “Guys, you got it all wrong. I said I hate FIGS.”

The billboard campaign’s “God” said “Speaking on the filthy human ‘phone’ contraption is entirely beneath the LORD,” and instead communicates only by email and social media.

With more than 87,000 followers on Twitter and over 1.8 million “likes” on Facebook, “God’s” followers helped grow the billboard campaign into something even bigger, collecting donations to charities with similar views and goals. 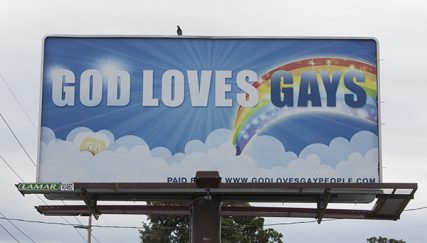 The God Loves Gays Billboard Project launched Aug. 9 on the crowdfunding site Indiegogo, and a billboard reading “God Loves Gays,” with a cartoon God peeking out of white fluffy clouds and a giant rainbow, went up on Sept. 8 in Topeka, Kan. Religion News Service photo by Sally Morrow

At $60,000, the campaign pledged to give $10,000 to the Trevor Project, an organization that works to provide crisis intervention and suicide prevention for LGBT youth. At $70,000, organizers planned to purchase bus ads, which are still pending. Once the campaign raised $80,000, a $10,000 donation was made to the National Alliance to End Homelessness. Now that the campaign has raised $100,000, a billboard will be put up in Salt Lake City.

But “God” was having some difficulties. Two billboard companies in Utah turned down the campaign’s request for space.

Dewey Reagan, general manager of Reagan Advertising, said the company owns around 2,000 billboards but has to rent the land around them. And while only some of the leases contain clauses that restrict controversial messages on the billboards, Reagan cannot go through and figure out which landowners would allow the billboard on their property.

“God,” however, eventually found a donor in Salt Lake City for his message.

“God” said the advertising company in Topeka, Lamar Advertising, has been easier to work with. A company spokeswoman, Allie McAlpin, said Lamar does not reject billboards on the basis of whether management agrees or disagrees with the message.

“We support the First Amendment right of advertisers and believe that it is in the best interest of our company and the communities we serve to accept advertising copy openly, subject only to requirements imposed by law and reasonable standards of fairness and decency,” McAlpin said.

The view of Westboro Baptist Church from the living room window of the Equality House, run by Planting Peace, which is across the street from Westboro in Topeka, Kan. Religion News Service photo by Sally Morrow

The Equality House, painted in the rainbow colors of gay pride, is across the street from Westboro in Topeka. The group that owns the house, Planting Peace, has worked to counter Westboro’s hateful message and to provide suicide prevention services to LGBT youth for 10 years.

The organization reached out to “God” after hearing about the campaign on Facebook. Planting Peace helped find a location for the billboard and talked with “God” about how the community might respond.

Amelia Markham, director of outreach for the Equality House, said she initially worried the campaign might prompt a backlash, but she said most of the community had so far been positive.

The goal of the Equality House isn’t to change people’s beliefs, Markham said, but to teach people to love.

“When people are arguing over your personhood, your existence, it does damage,” Markham said. “We need more positive messages. We need more love.”

Markham said the Topeka billboard is the first one she’s seen involving a controversial issue that does not try to instill fear and instead includes a positive message.

While some people argue it would be better to ignore Westboro, “God” disagrees.

“While I respect this opinion, I contend that evil is only allowed to exist because good people do nothing,” the campaign owner said. “The time has come for good people to fight back.”