BERLIN (RNS) Germany’s Roman Catholics are launching a campaign to reinstate references to God in the preamble to the newly drafted constitution of the northern German state of Schleswig-Holstein. 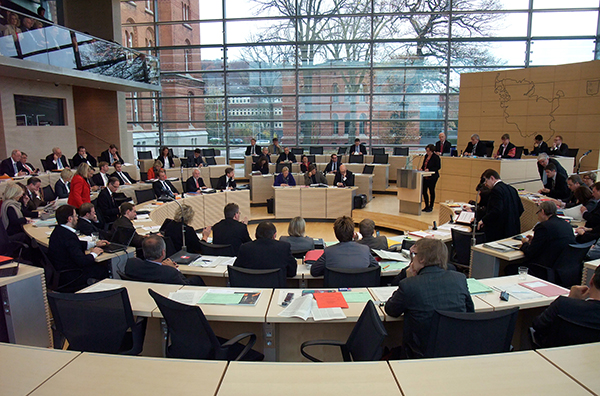 Last week, Germany’s Schleswig-Holstein state parliament voted with a two-third’s majority to exclude mentions of God in the new constitution, becoming the seventh state in Germany (out of 16) to do so. Photo by Johannes Utzolino, courtesy of the government of Schleswig-Holstein

Last week, the state parliament voted with a two-thirds majority to exclude mention of God from the new constitution, becoming the seventh of 16 German states to do so. This prompted Roman Catholic leaders to wonder whether Germany is a “godless society” and to start a petition to overrule the change.

The church needs 20,000 signatures to force parliament to reconsider the vote. Ansgar Thim, an administrator for the Hamburg Archdiocese, said Friday (Oct. 10) he was “confident” the petition would surpass the quota.

A similar public initiative launched in the mid-1990s in the state of western Lower Saxony successfully returned a reference to God to that state’s constitution.

The issue has sparked debate among lawmakers in Schleswig-Holstein, with some active church members saying there should be clear division between church and state.

“There are a lot of people who do not believe in any religion, and even people who are in the church in Germany want a complete separation between state and church,” said Erika von Kalben, a Lutheran and Schleswig-Holstein Green Party lawmaker who voted against the resolution.

“Religion is private and not political,” she said. “I believe that state and religion must be two different parts.”

The God question is also a matter of where in Germany you are from, said von Kalben. The majority of the former East German states make no reference to God in their constitutional preambles, a holdover of Socialist days, when religion was banned.

The German federal constitution contains reference to both religious and ethical principles so as not to alienate believers or nonbelievers, say experts.

“The German constitution does not come from God; it comes from the people,” said Michael Bongardt, director of the Institute for Comparative Ethics at Berlin’s Free University. “This is a really important point, because otherwise the constitution would only be valid for people who believe in God.”

Bongardt said that although the German state is secular, connections between the state and religious institutions exist. For instance, religious members are required to pay a church tax.

But increasingly, he said, Germans support a total separation of church and state.

(Luigi Serenelli is a freelance writer for Associated Reporters Abroad.)