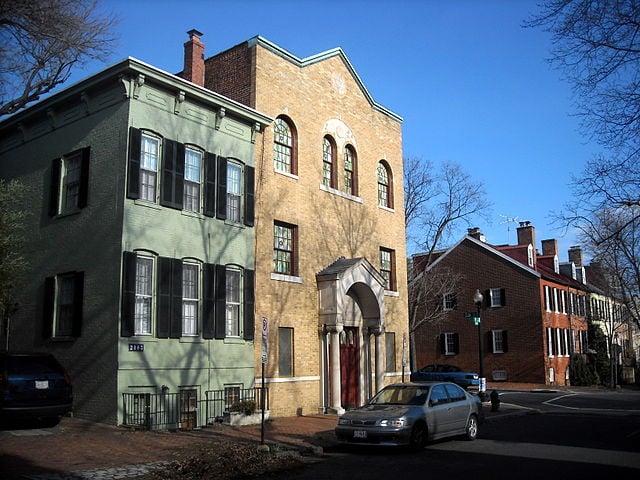 Kesher Israel (center), located at 2801 N Street, N.W., in the Georgetown neighborhood of Washington, D.C. The synagogue is a contributing property to the Georgetown Historic District, a National Historic Landmark.
October 15, 2014
Lauren Markoe

WASHINGTON (RNS) Accused of spying on naked women, one of the capital's most prominent rabbis has been suspended without pay from a synagogue whose congregants include former Sen. Joseph Lieberman and U.S. Treasury Secretary Jacob Lew.

Police arrested Rabbi Barry Freundel, 62, on Tuesday (Oct. 14)  at his Georgetown home, not far from Kesher Israel, the synagogue he has led since 1989. They charged him with voyeurism and indicated that he had spied on women through a camera pointed at the shower used before dipping into the synagogue's mikvah, or ritual bath.

Kesher Israel (center), located at 2801 N Street, N.W., in the Georgetown neighborhood of Washington, D.C. The synagogue is a contributing property to the Georgetown Historic District, a National Historic Landmark.

The news shocked Jews in and beyond Washington, making front-page headlines in Jewish newspapers across the nation. Carrie Bornstein, executive director of Mayyim Hayyim, a mikvah near Boston that has spearheaded a national movement to encourage Jews of varying levels of religious observance to use mikvah, said she had never heard of such an incident happening at a mikvah before.

The mikvah, she said, "should be the epitome of a safe space."

Sharon Shapiro, who writes a blog popular among young Orthodox Jewish women,  wondered about the fate of those camera images.

"Who knows if the recorded footage remained only on Freund’s computer or if he shared it with others online?" she wrote.

Married women in Orthodox Judaism ritually immerse themselves in a mikvah -- a small pool with water  -- seven days after their menstrual period has ended. The ritual bath is also used at life cycle events, from graduations to divorces to adoptions to conversions.

Kesher Israel leans traditional on the Jewish observance spectrum. But as a modern Orthodox synagogue, it has accepted nontraditional roles for women. Its board of directors is headed by a woman, for example.

That board issued a statement Tuesday suggesting that the synagogue itself led police to Freundel: "Upon receiving information regarding potentially inappropriate activity, the Board of Directors quickly alerted the appropriate officials," the statement said.

"This is a painful moment for Kesher Israel Congregation and the entire Jewish community," the statement continued. "At this challenging time, we draw strength from our faith, our tradition, and our fellow congregants."

Rabbi Freundel's arrest was the second bombshell to hit the D.C. Jewish community in little more than a week. On Oct. 6, Rabbi Gil Steinlauf, senior rabbi of the city's largest Conservative synagogue, stunned his congregants by announcing that he is gay and that he and his wife, who is also a rabbi, plan to divorce.

The news from Kesher Israel comes in the midst of a busy Jewish holiday season, including the end of the seven-day celebration of Sukkot, the fall harvest festival, and Simchat Torah, which begins Thursday (Oct. 16) at sundown and celebrates the annual completion of the reading of the Torah, or the first five books of the Bible.

"As always, Kesher Israel will remain open as a place of learning, prayer, and community, including throughout the remainder of the Sukkot holiday," the synagogue's statement concluded.