VATICAN CITY (RNS) As Catholic bishops attending the global Synod on the Family were drawing up their final report on Friday (Oct. 17), prominent cardinals continued to spar over the direction the church should take on key issues.

Conservatives accused the synod of bias when a midterm report was released including a section “welcoming homosexual persons” and English-speaking bishops took the unusual step of demanding a new version of the document substituting it with the words, “providing for homosexual persons.”

One cardinal reportedly threatened to walk out of the synod hall if changes were not made. 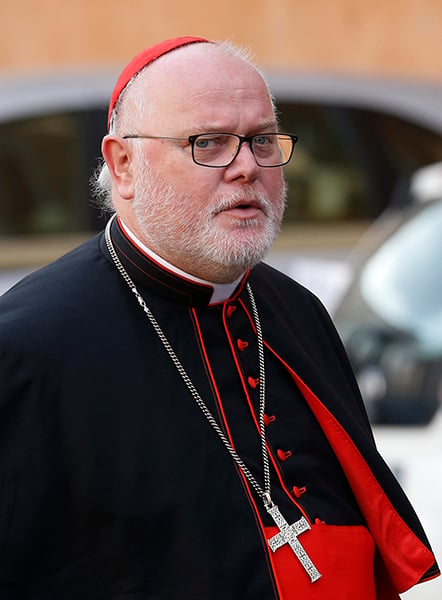 Cardinal Reinhard Marx of Munich and Freising, Germany, arrives for the morning session of the extraordinary Synod of Bishops on the family at the Vatican Oct. 16. Photo by Paul Haring, courtesy of Catholic News Service

On Friday, German Cardinal Reinhard Marx from Munich put homosexuality back on the agenda telling reporters “exclusion” was not part of the Catholic Church.

“For me it is unthinkable to say that a homosexual person cannot live with the gospel,” Marx said in German. “Everyone who is in particular situations should be welcomed. Excluding someone is not part of church tradition.”

“What will be the final word? I cannot predict that,” Marx said. “But I can tell you we German bishops are isolated on this position.”

South African Cardinal Wilfrid Napier, who is a member of the committee writing the synod’s final report, told Vatican Radio there were two issues that had got people “hot around the collar.”

“One was presenting homosexual unions as if they were a very positive thing,” Napier said. The other was related to broken marriages and “access to the sacraments.” But he said there was now a “common vision” about the problems affecting marriage and family life.

“We can’t be distracted by sideshows,” he said.

New York Cardinal Timothy Dolan predicted Thursday that the final synod document would include “major corrections” and would look a lot different than the midterm report.

The final report is expected Saturday and will be considered at next year’s synod.