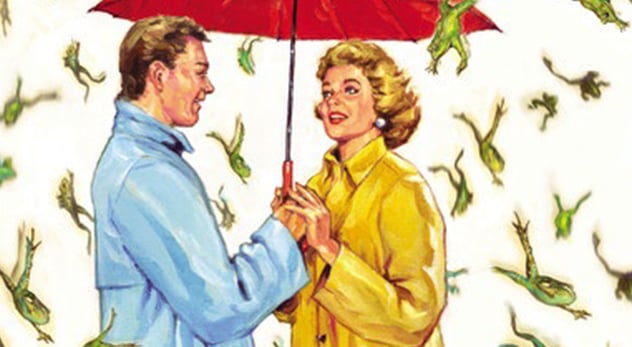 A new anti-devotional devotional features voices from across the religious spectrum and offers something to challenge, encourage, and royally piss off just about everyone. - Image courtesy of Jericho Books

Every conservative Christian boy or girl knows that there are at least three things they must do regularly to stay in God's good graces: evangelize unsaved people, pray before they eat a meal, and have a daily "quiet time" where they get alone and read the Bible. Now a new book has made the third action accessible for spiritual misfits, agnostics, skeptics, and none-of-the-aboves.

In Disquiet Time: Rants and Reflections on the Good Book by the Skeptical, the Faithful, and a Few Scoundrels, readers will find dozens of sassy reflections by varied voices such as Reformed theologian Steve Brown, progressive author Brian McLaren, humorist Susan E. Isaacs, and Liberty University professor Karen Swallow Prior. The foreword is penned by Eugene Peterson, translator of the The Message version of the Bible. [tweetable]Disquiet Time offers is something to challenge, encourage, and royally piss off just about everyone.[/tweetable]

Here, I discuss the message of the book with award-winning journalist Cathleen Falsani, who co-edited the volume with Jennifer Grant.

RNS: Disquiet Time seems built on the idea that we've misunderstood the Bible. If so, how do you hope to lead people to a better understanding?

CF: Disquiet Time isn’t meant to be a corrective. Quite the opposite, actually. We want to invite folks to the table (or, rather, to the Bible) who might otherwise feel unwelcome because they’re worried about “doing it wrong,” or because they don’t believe what many Christians say they’re “supposed” to believe, or because they’re carrying around a lot of hurt and baggage and woundedness and resentment from interactions with so-called “Christ followers” and churches. But the invitation God and Jesus extend is to everyone, and it’s a come-as-you-are invitation.

If we can’t be real with God, who can we be real with? Therefore, when we read the Bible or reflect on scripture or have our “quiet time” or however you choose to describe it, if we have to leave part of ourselves behind or secrete some of our feelings or doubts, what’s the point? We wanted to take the pressure off, to remove the fear from interacting with the Bible.

RNS: What are the passages from Scripture that haunt you or confuse you?

CF: The story in Mark 7 and Matthew 15 where Jesus encounters the Syrophoenician woman whose daughter, we’re told, is possessed by demons is not my favorite. It’s difficult for me to hear Jesus call the woman a “little dog,” and I find it confounding that he would seemingly act or speak unkindly. Jesus as a jerk is about the most disquieting thing I can imagine.

The general misogyny found throughout the Bible is troublesome, even if I understand how women were perceived and valued at the time. But even the instances of less systemic, more particular misogyny — where women are raped and murdered or traded like so much chattel — pale in comparison to “jerk Jesus” in the giving-me-the-willies department.

RNS: Is there a passage you wish you could rip from the pages of Scripture and how have you made peace with it?

CF: I’d point to the Syrophoenician woman story again here and say that the older I get the more I realize I don’t know and the more okay I am with not knowing. I can’t imagine why Jesus would say that, but I must be missing something. I’ve read a lot of the apologetics around this story and although they are helpful, a certain level of disquietude remains for me. I’ve made peace with that confounding bit of Bible the way I’ve made peace with a lot of things in this life — spiritual or otherwise: I don’t know and I’m okay with that.

RNS: Which contribution most surprised you?

CF: There are two that come immediately to mind. The first is the chapter written by one of my oldest and dearest friends, Carolyn Reyes. We met in college at Wheaton when we were both Birkenstock-wearing, left-leaning evangelical Christians sauntering toward Canterbury. We both attended seminaries and have theological degrees. Christianity, particularly the evangelical variety, ran its course for Carolyn a number of years ago and she’s been a practicing Zen Buddhist for quite a while now. But she’s one of the most loving and truly Christ-like people I know. I asked Carolyn to contribute because I wondered whether there were passages of Scripture that still held meaning and power for her, or perhaps a certain kind of comfort. Carolyn wrote a short, eloquent, funny, honest and true essay about Jesus in the crowd when the woman touches the hem of his garment. Carolyn hates crowds and she can’t imagine what it must have been like for Jesus, constantly surrounded by throngs of people.

The second is Brian McLaren’s chapter, which closes the book. I’ve probably thought about it every day since he first sent it to me. Brian has been reading, meditating, praying about, and wrestling with the same passage for 40 years: 1 Corinthians 13. The essay is so touching and such a surprise.

RNS: Some conservative readers may find the book's provocative edge off-putting. What's in it for them?

CF: Well, not everyone in the book is a tree-hugging screaming liberal like Jen and me. It features a spectrum, from the far left to the right (I wont’ say “far right” because that’s just not true) spiritually and politically.

But I find the wording of your question interesting. Why would “provocative” be “off-putting” to a “conservative reader”? I guess I’d push back and ask, "what is there to fear in provocation?" If you know what you believe and you’ve got the answers and are sure of them, what’s scaring you?

What’s in it for them is the same for any reader: hearing how other people understand, are heartened by, wrestle with, misunderstand, embrace, or dismiss the Bible might show you something about the Bible or yourself that you didn’t know or hadn’t realized. And that’s not a bad thing, is it? [tweetable]To grasp that not everyone understands Scripture the way you do is instructive.[/tweetable] Even if you think they are dead wrong. It’s information that might make you more gracious or more humble; it might help you understand how better to have a relationship with someone whose fundamental beliefs are different than yours but whom you — and all of us — are nevertheless called to treat with respect, kindness, and love.