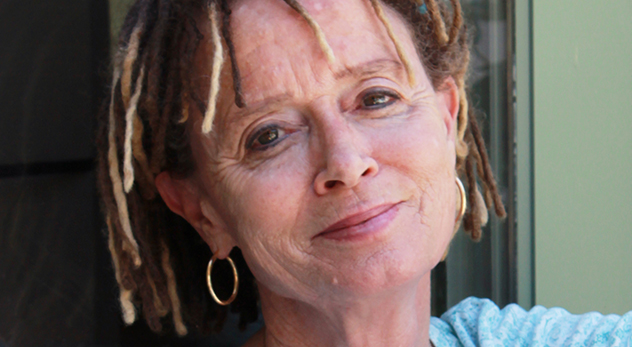 The contents the bestselling author’s next book has been kept under wraps, but she says half of it is about forgiveness and some of it may make “fundamentalists apoplectic.” – Photo credit: Sam Lamott / Courtesy of Anne Lamott

Anne Lamott has often been called the “People’s Author” because of the homespun honesty dripping from the pages of her books. Recently, the perennial bestseller began experimenting with short-form spiritual reflections with the release of Help, Thanks, Wow in 2012 and Stitches in 2013. Anne’s experiment will become a trilogy on November 10 with the release of Small Victories: Spotting Improbable Moments of Grace. The New York Times once declared, “a minute with Anne Lamott is like a week with anyone else,” and these bite-sized books contain at least a week’s worth of wisdom each.

The contents of the Small Victories have been kept under wraps by the publisher–there’s not even a “Look Inside” feature available on Amazon–so this curious journalist began to dig around for information. I decided to go straight to the source herself, and Anne was gracious enough to answer a few questions and offer us a sneak peek.

RNS: A TV preacher might promise tips for “spiritual breakthroughs” or big moments of transformation. Instead you focus on “small victories.” Why do you think people want or need something small?

AL: [tweetable]Small is how blessings, healing, progress and increase occur.[/tweetable] Not on the fantasy, magic wand realm of televangelists. In my experience, all you ever need is a little bit of this or that—a spritz of spiritual WD-40, five minutes of someone’s time—for there to be a significant shift in perception. Which is what most miracles look like.

RNS: Part of achieving small victories involves forgiveness, which you call “the hardest work we do.” Why is forgiveness so darn difficult?

AL: Half of Small Victories is about forgiveness, so it’s hard to answer in a line or two. [tweetable]Forgiveness is difficult–it just is![/tweetable] It’s a natural response to avoid more pain, rather than confronting it, breathing right into it, which is how forgiveness takes place. For you to forgive something awful I did to you means that you have to re-experience the pain, in your heart and gut. That’s so brave. When we are taught to move on with our lives “forgive and forget” is a very nice thought but, in my experience, it does not lead to deep healing.

RNS: What do you say to readers who feel they’ve been wronged so badly they can’t or won’t offer forgiveness?

AL: I’d say that I sure understand. But the willingness to change in any real way usually comes from the pain of not forgiving. You have to ask yourself, “Would I rather be right or happy?” [tweetable]Life is incredibly short, and a lack of forgiveness makes us toxic.[/tweetable] So we lurch along for awhile in this toxic state, until we are desperate for restoration and mental health and a new Life.

RNS: You’re talking about small victories but some people would say their lives feel mostly made up of defeats. Any encouragement for the serial failure?

AL: I don’t know people who would say that, as most of the people I know are people who’ve recovered from alcoholism or eating disorders. So they know they’ve had a victory.

RNS: You draw lessons about this from an experience where you joined Match.com as a grandmother. Why did you do that and what did you learn?

AL: It took an essay to capture all that, but the main thing is simple: I learned how to date. I learned how to meet men, have a cup of coffee, plan to meet again, or not, deal with my feelings of attraction, aversion, rejection, excitement—the whole enchilada.

RNS: You talk about receiving the “Ham of God.” Explain.

AL: This is my favorite essay in the whole book, and I don’t want to wreck the story for anyone!

RNS: You seem to have a knack for making conservative Christians uncomfortable. Which ideas in this book do you expect will make more conservative readers squirm in their seats?

AL: There are a couple of old pieces about the horrible pain of watching Bush and Cheney lead this country into an immoral war, based totally on lies and fear-mongering, that will take this country and world decades to bounce back from. Also, I express a belief that God adores and is there for each and every one of us, whether we are Christian, Jewish, Muslim, straight, gay—and this tends to make fundamentalists apoplectic. Oh well.