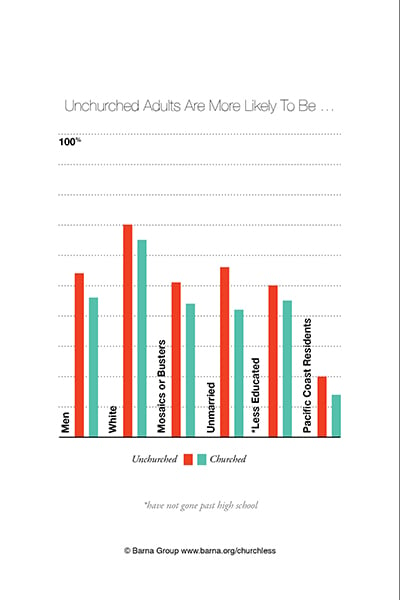 “Unchurched Adults Are More Likely To Be…,” graphic courtesy of Barna Group.

(RNS) If you’re dismayed that one in five Americans (20 percent) are “nones” — people who claim no particular religious identity — brace yourself.

How does 38 percent sound?

That’s what religion researcher David Kinnaman calculates when he adds “the unchurched, the never-churched and the skeptics” to the nones.

He calls his new category “churchless,” the same title Kinnaman has given his new book. By his count, roughly four in 10 people living in the continental United States are actually “post-Christian” and “essentially secular in belief and practice.”

If asked, the “churchless” would likely check the “Christian” box on a survey, even though they may not have darkened the door of a church in years.

Kinnaman, president of the California-based Barna Group, slides them into this new category based on 15 measures of identity, belief and practice in more than 23,000 interviews in 20 surveys.

The research looked at church worship attendance and participation, views about the Bible, God and Jesus, and more to see whether folks were actually tied to Christian life in a meaningful way or tied more by habit or personal history.

Ed Stetzer, president of LifeWay Research, once called nominals — people attached by name only — “survey Christians.” They don’t want to cut ties with their parents or go all the way to atheism, Stetzer said, “so they just say ‘Christian’ since it is the default category from their heritage.”

Kinnaman now has the numbers to back that up.

“We are far from becoming an atheist nation,” he said. “There are tens of millions of active believers in America today. But the wall between the churched and the churchless is growing higher and more impenetrable as more people have no muscle memory of what it means to be a regular attender at a house of worship.”

How these people think, pray and use their time is shifting away from a faith-based perspective. As a result, a churchless or secular worldview “is becoming its own social force.”

When political scientists burrow into election results, they may find that church attendance is less and less useful for predicting or evaluating political social and cultural attitudes. If you are not around people of strong belief, there’s not a lot of spillover impact.

Stephen Mockabee, an associate professor of political science at University of Cincinnati, has compared church attendance to medication: “It’s not only the drug but also the dose that matters.”

The churchless come in several tribes, according to Kinnaman.

About a third (32 percent) still identify as Christian. They say they believe in God but they’re wobbly on connections. Kinnaman calls them “Christianized but not very active.”

That might include Katie West of Mount Sterling, Ky., or Mike Wilson of Webster City, Iowa.

West keeps the Christian label because, she said, “I follow or at least try to follow the teachings of Christ.” She avoids religious services “unless roped into a wedding or funeral,” but considers herself “a spiritual person without looking at a Bible.”

Wilson is the paid webmaster for a Lutheran church but he can’t recall the last time he attended a worship service or read the Bible. He checks the Christian box if asked in a survey, even though he resonates more with Buddhist and other Eastern philosophies.

“Religion is the starting point to enlightenment, but at some point you have to take that leap of faith and make your personal relationship with God exactly that — personal,” Wilson said. “So if you can find a religion that encompasses that better than Christianity, I will call myself that.”

Other “tribes” among the churchless include:

Kinnaman predicts no change in direction. He concluded: “The younger the generation, the more post-Christian it is”:

Karen King, 52, a dispatch scheduler for a local transit agency in Mount Vernon, Wash., knows her state is among the least churched in the nation. Yet among the secular crowds, there are plenty of churchgoers.

“I know because I schedule people to get to churches through Dial-A-Ride. There must be 40 or 50 churches between Mount Vernon and nearby Burlington.”

And King goes to none of them.

The granddaughter of a Presbyterian pastor, King says she hasn’t been to church for a worship service in more than 30 years. Her daughter, a millennial and a pagan, doesn’t go either.

Although King still thinks of herself as a Christian, she has stepped back from denominational brands. Instead, she says, she just tries to show love.

“I do random acts of kindness. I talk to God when I think I need to. I think I have a good connection to Mother God and Father God.“