VATICAN CITY (RNS) American Cardinal Raymond Burke, the feisty former archbishop of St. Louis who has emerged as the face of the opposition to Pope Francis’ reformist agenda, likened the Roman Catholic Church to “a ship without a rudder” in a fresh attack on the pope’s leadership.

In an interview with the Spanish Catholic weekly Vida Nueva, published Thursday (Oct. 30), Burke insisted he was not speaking out against the pope personally but raising concern about his leadership.

“Many have expressed their concerns to me. At this very critical moment, there is a strong sense that the church is like a ship without a rudder,” Burke said.

“Now, it is more important than ever to examine our faith, have a healthy spiritual leader and give powerful witness to the faith.” Cardinal Raymond L. Burke, prefect of the Supreme Court of the Apostolic Signature, leaves the concluding session of the extraordinary Synod of Bishops on the family at the Vatican Oct. 18. Photo by Paul Haring, courtesy of Catholic News Service

Burke is the current head of the Vatican’s highest court known as the Apostolic Signatura, but he said recently he is about to be demoted. There is speculation he will be made patron of the Order of Malta, a largely ceremonial post.

“I have all the respect for the Petrine ministry and I do not want to seem like I am speaking out against the pope,” he said in the interview. “I would like to be a master of the faith, with all my weaknesses, telling a truth that many currently perceive.”

“They are feeling a bit seasick because they feel the church’s ship has lost its way,” he added.

Burke has expressed an uncompromising stance on keeping the ban on Communion for Catholics who divorce and remarry without an annulment, and is one of five conservative cardinals who aired their views in a new book, “Remaining in the Truth of Christ,” released on the eve of the bishops’ blockbuster synod in early October.

When the synod signaled a more welcoming tone to gay and lesbian Catholics, Burke publicly accused the global gathering of bias and was among those who pushed for a less conciliatory approach in the final report.

Burke had previously said that Catholic families should not expose children to the “evil” of homosexuality by inviting a gay son home for Christmas with his partner.

In his latest interview, Burke said the church was “the pillar of marriage” and challenged the pope’s revolutionary “Who am I to judge?” remark on gay people. 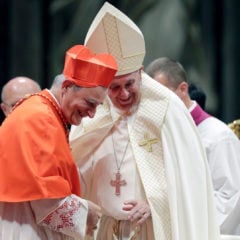